Arms dealers are Judas of today; says Pope during Mass for refugees 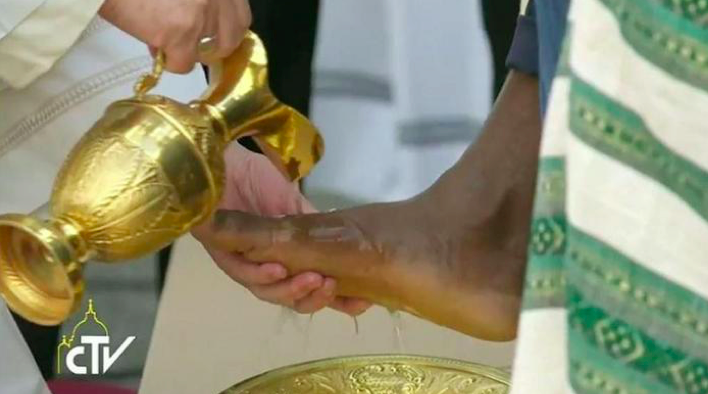 By CHRISTOPHER LAMB, IN VATICAN INSIDER, 3/24/16
Pope Francis washes the feet of guests at the asylum-seekers' reception centre (CARA) in Castelnuono di Porto.As he washes feet of asylum seekers, Francis says all faiths can live in peace in wake of Brussels terrorist attacks

(Note: Where are our Syromalabar-Malankara bishops? They seem to be real Zeros in understanding like statues  —  their  eyes  don’t see, ears don’t hear, minds don’t grasp. Do they see  and hear what the Pope is doing and saying?  For Syros religion consists of rituals and traditional divisive (man-woman) practices.  For Pope

Francis religious practices are intertwined with finding solutions to the joys and sorrows, hopes and aspirations  first of the marginalized, displaced, whether Christians or believers in any religion or no religion and therefore Catholic,  that is embracing the whole of humanity. Therefore he affixes the name Judas to all arms dealers and manufacturers. The two Syros, being too busy with territorial expansion (religious colonization) and augmenting numerical strength of bishops, can’t  see anything  beyond their narrow skeleton Rites of 25 Lakhs and 2  Lakhs. Francis is a Good Samaritan for the whole world,  the two Syros can’t think beyond their two Oriental Rites and Synods.  The God of Francis is not that of the “Catolic

church” but of all religions and so he is at home with every religion. The  Syros  are like  fish out of water with other religions. There is a lot to comment on every sentence below for those who have a universal, all inclusive (catholic) out look. I leave that to your fertile minds. james kottoor, editor)

Arms dealers and manufacturers are the Judases of today for their involvement in the Brussels terrorist attacks, Pope Francis said during a moving Holy Thursday liturgy in which he washed the feet of twelve refugees. The Pope contrasted the gesture of Jesus' washing the feet of his disciples with that of Judas, who betrayed Jesus for money.

In his homily during the Mass of the Last Supper Francis likened Judas' betrayal to those "behind" Brussels terror attacks this week which killed 31 and injured 270. The betrayers, he said,  "are manufacturers, arms dealers who want blood, not peace; they want war, not brotherhood."

The Mass, which begins the Easter Triduum of Holy Week, took place at the Castelnuovo di Porto, a centre which helps asylum seekers and is located 16 miles north of Rome. The liturgy took place in front of almost 900 refugees from 25 countries with the Pope washing the feet of eight men and four women.

Among them were four Nigerian Catholics, three Eritreans who are Coptic Christians, three Muslims, a Hindu and an Italian. Many were visibly moved when the Pope washed and kissed each of their feet.
"We are different, we have different cultures and religions, but we are brothers and we want to live in peace," Francis said during his homily. "Muslims, Hindus, Catholics, Copts, Evangelicals but all brothers and children of the same God: we want to live together in peace."

He added: "May each one of us in our own religious language, beg the Lord that this brotherhood be contagious in the world, so that there are not 30 coins to kill our brother, so  that there will always be brotherhood and goodness." This is the first Holy Thursday since the Pope's liturgical changes were made to allow priests to wash the feet of both men and woman during the ritual, which recalls Jesus' washing of his disciples feet. 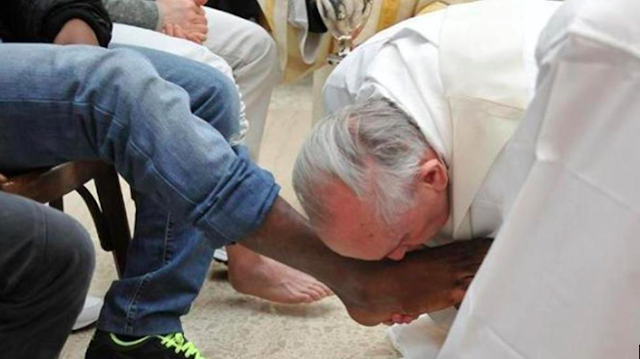 The Pope has, however, washed the feet of females in the past on previous Holy Thursdays, including those of a Muslim woman.
Earlier in the day 200 chocolate eggs arrived as presents from the Pope to the centre, known as CARA. Francis also donated a small amount of money to each of the 892 guests while after the Mass he greeted each of them individually.
Those staying at the centre are all applying for asylum in Europe and living at CARA while their applications are being processed.
The guests come from 15 african counties, nine Asian, and a European outside the European Union. Of these 849 are men, 36 women and 7 children while eighty per centre are aged between 19 and 26 years – in one Iraqi family there are four generations represented.