Are we NOT betraying ‘Laudato Si’? 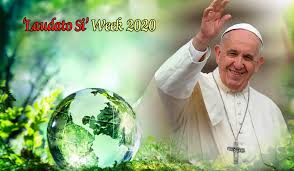 May 24, 2020 completes full five years of Pope Francis’ path-breaking and incisive Encyclical Letter ' Laudato Si '- On Care for Our Common Home.  It was the first major Papal teaching on a subject of critical importance namely ‘the environment’.  ‘Laudato Si ' meaning “Praise be to you" are the first words of the celebrated ' Canticle of the Creatures' of St Francis of Assisi. The Encyclical which came months before the  landmark  2015 United Nations Climate Change Conference, (COP 21) which was held in Paris in fact set the tone for world leaders to come to grips with real causes which were responsible for environmental degradation and which ultimately caused climatic changes with disastrous results everywhere.

In the opening statements of the Encyclical, Pope Francis makes his intention clear “to address every person living on this planet” (#3).  He says “this sister (mother earth) now cries out to us because of the harm we have inflicted on her by our irresponsible use and abuse of the goods with which God has endowed her.  We have come to see ourselves as her lords and masters, entitled to plunder her at will. The violence present in our hearts, wounded by sin, is also reflected in the symptoms of sickness evident in the soil, in the water, in the air and in all forms of life” (#2).

In the first Chapter, he states that “we cannot adequately combat environmental degradation unless we attend to causes related to human and social degradation” (#48); he deals here with several ‘aspects of the present ecological crisis’:  pollution, waste and the throw-away culture; climate as a common good; displacement and migration caused by environmental degradation; access to safe drinking water as a basic and universal human right; loss of bio-diversity; decline in the quality of human life and break down of society; global inequality. He also denounces unequivocally the use of pesticides and the production of genetically engineered (GE) crops.

Pope Francis strongly notes that “the earth’s resources are also being plundered because of short-sighted approaches to the economy, commerce and production” (#32).  In making such statements, in taking a stand for the ‘care of our common home’, Pope Francis has indeed created several enemies among the rich and powerful-who are bent on profiteering; those engaged in the extractive industry by plundering very precious and scarce natural resources. This was  indicative from the fact that  Gallup Poll conducted in the United States a little after the Encyclical was released, showed that the Pope's ratings had plummeted by more than 18% points among fairly large sections of Americans and particularly the wealthy and other vested interests.

Pope Francis certainly did not lose any sleep because there was a drop in his popularity; he has been in consistent in his love for the poor and his commitment to the protection of the environment. Throughout the Encyclical,  he insists that we have been called to be stewards of the creation which God has entrusted to us.  He ensures that ‘Laudato Si’ focuses on human rights violations and injustices. He does not mince words when he says “in the present condition of global society, where injustices abound and growing numbers of people are deprived of basic human rights and considered expendable, committing oneself to the common good means to make choices in solidarity based on a preferential option for the poorest of our brothers and sisters”  (#158).

What is paramount in the final analysis says Pope Francis is a radical commitment to ensure positive change, which is the need of the hour. For this he says, every section of society must play a definite role in a collaborative and concerted manner. The Pope does not spare the priests of the Catholic Church and he calls upon them to engage with the faithful on environmental issues. Further, he challenges international and national Governments and mechanisms saying, “the same mindset which stands in the way of making radical decisions to reverse the trend of global warming also stands in the way of achieving the goal of eliminating poverty. A more responsible overall approach is needed to deal with both problems: the reduction of pollution and the development of poorer countries and regions” (#175)

‘Laudato Si’ is a document which disturbs and at times has a threatening tone. Therefore there is always the danger that many would like to cosmeticize this powerful document: to tinker with bits and parts, to be selective and comfortable in its reading; to do non-threatening acts like growing trees, propagating alternative technologies, not using plastics, having environmental education, making environment project work etc. Whilst all these acts are certainly good and may lead to something more sustainable, ‘Laudato Si’ is path-breaking, radical in nature, it makes one uncomfortable and touches every single dimension of our human existence.  The Pope invites all to an ecological conversion, to change directions so that we can truly care for our common home; not to pay heed to Pope Francis’ prophetic words; to rubbish this timely and important message or to relegate it to mere tree-planting would certainly be a great disservice not to the Pope but to Planet Earth!

On 22 April, Earth Day Pope Francis praised the environmental movement, saying it was necessary for young people to “take to the streets to teach us what is obvious, that is, that there will be no future for us if we destroy the environment that sustains us”. Recounting a Spanish proverb that God always forgives, man sometimes forgives but nature never forgives, Francis said, “If we have deteriorated the Earth, the response will be very ugly. “He further went on to add, “We see these natural tragedies, which are the Earth’s response to our maltreatment. I think that if I ask the Lord now what he thinks about this, I don’t think he would say it is a very good thing. It is we who have ruined the work of God.” Saying the Earth was not an endless deposit of resources to exploit, he said, “We have sinned against the Earth, against our neighbour and, in the end, against the creator.”

Interestingly, a lead article in ‘The Hindu’ (23 May 2020) says that during lockdown the Ministry of Environment and Forests (MoEFCC) panels cleared or discussed thirty projects in biodiverse forests. The projects including mining and a highway, were brought up during virtual conferences; but Environmental scientists say that site inspections are a ‘crucial component’ of project evaluation. In fact the current Government has clearly abdicated its role as the protector of India’s rich biodiversity. Almost all forests from the Aravallis in North India (incidentally the Aravallis are regarded as  one of the oldest mountain ranges in the world, which acts as a water recharge zone, are green lungs which shield the dust that blows from the Thar desert  for most of North India and ultimately saves a vast region from desertification); then there are the rich bio diversity areas of Dehing Patkai and Dibang Valley in the North East, Talabira in Odisha, Hasdeo in Central India, Western Ghats  across West and South India – all these are being indiscriminately being opened up to industries.  Not only is biodiversity being destroyed but the people living in these forests, the adivasis, and the indigenous peoples will certainly lose their natural habitat. Already the regime has made its intentions clear to deprive those who were living in the forests for centuries, of their legitimate rights to these forests.

In another blatantly anti-environmental decision the Finance Minister announced a few days ago, commercial mining of coal by the private sector, ending government monopoly on the sector. When the world is doing away with fossil fuels – India is helping a few rich to destroy our fragile ecosystems and amass huge wealth.

The recent AMPHAN cyclone which has devastated the lives of millions (in West Bengal and Odisha) overnight and the COVID-19 pandemic are no flashes in the pan. These have their roots in our consumeristic lifestyles our callous attitudes towards the environment and our lust for profiteering which makes us very insensitive to the destruction of our fragile ecosystems.

In the context and mandate of ‘Laudato Si’ what has been the stand of the Church in India?

Not being able to say an unequivocal ‘yes’ to any of the above is a clear indicator that we have not (individually and collectively) mainstreamed the spirit and message of ‘Laudato Si’ but in fact, been a betrayal to it!

It is the ‘Laudato Si’ week and the Global organisers have given us a Common Prayer for this fifth anniversary; we need to say it with one heart and in one voice:

Loving God, Creator of heaven and earth and all that is in them,

You created us in your image and made us stewards

of all your creation, of our common home.

You blessed us with the sun, water and bountiful land so that all might be nourished.

Open our minds and touch our hearts, so that we may attend to your gift of creation.

Help us to be conscious that our common home

belongs not only to us, but to all future generations,

and that it is our responsibility to preserve it.

May we help each person secure the food and resources that they need.

Be present to those in need in these trying times,

especially the poorest and those most at risk of being left behind.

Transform our fear, anxiety and feelings of isolation into hope

so that we may experience a true conversion of the heart.

Help us to show creative solidarity in addressing the consequences of this global pandemic,

Make us courageous to embrace the changes that are needed in search of the common good,

Now more than ever may we feel that we are all interconnected,

We make our prayer through Christ our Lord.

Through this powerful Encyclical Pope Francis puts one pertinent question “what kind of world do we want to leave to those who come after us, to children who are now growing up?” (#160). Do we have the COURAGE to answer this question and ACT NOW?