Are the wicked always punished? How can crooked Bishop Franco fare better than crooked sadhus? 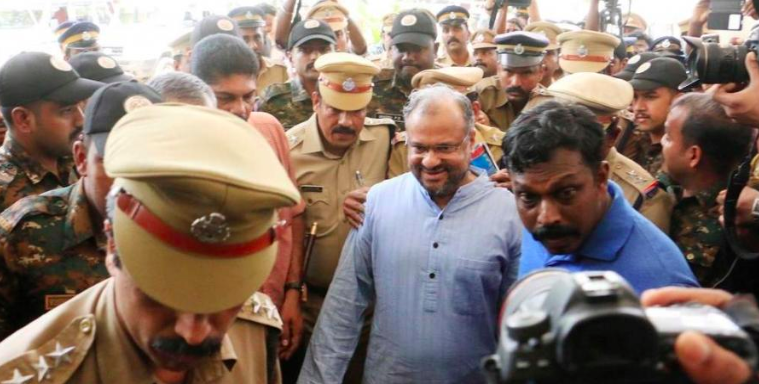 A cartoon report we published in CCV (June 14) says it all:

The Catholic Church in Kerala, also in the whole world, has become a laughing stock, or rather a matter to be laughed at or cast aside, thanks to the notorious exploits of a bishop and a Cardinal. Notoriety is one way of becoming famous: ‘For the wrong reason’. True name is: Infamous!

The clerical-hierarchical class in the Church may not be getting the message, but the lay folk, ‘the cattle class’, the people of God, irrespective religious divides, who make up the real Church are getting it. The latter must increase and the former must  decrease, fade out. That is the bright and hopeful sign of the times.

Let Jesus and the visibility of his simple, humble life-style of foot-washing service to the least, last and lost grow hundred fold and guide his followers. But one question still remains: Are the  wicked always punished in this world? We don’t see it done here below! As for the next world, one doesn’t know, if it exists even!  james kottoor, editor CCV.

Finally, Kerala’s sensational nun-rape case will move another step forward this week. Charges against the libidinous Bishop Franco Mulakkal will come up for hearing in a magistrate’s court. Resourceful parties like this Jalandhar bishop have different ways in which they can make things drag on. But, however snail-like the progress, there is movement. And that is relief enough.

Actually the bishop was already in the news thanks to a cartoon that won the State Lalit Kala Akademi award. Following protests by the Catholic Bishops Council, the state government made some noises about making amends, but the Akademi tried to stand its ground. The cartoon by Subash showed Bishop Franco as a rooster in brilliant colours, holding the ceremonial bishop’s staff on the crown of which hangs a woman’s underwear. The rooster is standing on a police cap held up by two politicians, a party-hopping opportunist and a communist leader caught in a sex scandal of his own, with a bunch of nuns fleeing from the scene.

Franco is India’s first bishop to be arrested on charge of raping and sodomising a 44-year old nun repeatedly. The arrest almost did not happen because the man turned out to be enormously influential. The Punjab police were reverential towards him. They let his private security guards attack journalists who had gathered to cover the story.

Kerala police officials who went to Jalandhar had to wait until the bishop found it convenient to meet them. When he got bail, he was given a hero’s welcome by masses of people. Some days later, a priest in the Jalandhar jurisdiction who had testified against the bishop was found dead. Nothing more was heard about the matter.

Clearly, Franco is no ordinary bishop. A postgraduate from Amritsar, he has spent much of his adult life in the Punjab-Haryana-Delhi circuit, becoming a kind of Malayalee Punjabi. A master of social networking, he developed ties with local officials and VIPs. A book, The Moral Teaching of Guru Nanak from a Catholic Perspective, made him a figure of admiration among Sikhs and Punjabis. To understand the extent of the man’s power, we only have to look at how some other men of God have fared.

Asaram Bapu was the dancing, singing king of 400 ashrams, multitudes of devotees around the world and unlimited funds to organise whatever took his fancy. Then one day he was booked in a rape case and sentenced to life. Even more celebrated as a godman was “Saint Dr Gurmeet Ram Rahim Singh Ji Insan”, head of the Dera Sacha Sauda, spiritual guru as well as the monarch of all he surveyed, singer, actor and film-maker who commanded a massive vote bank and used it to his advantage. Then one day he was sentenced to 20 years in jail for two rape cases and life imprisonment for a murder.

What the Hindu and Sikh godmen could not achieve, the Christian bishop could. Which makes Ch ristianity the most influential religious force in the country. How can the BJP accept this? Isn’t it an affront to our national pride to allow crooked bishops fare better than crooked sadhus? Franco must have friends in the highest ranks of the BJP.

All through the course of the scandal, the power of the priest was evident. It took nearly three months for the authorities to arrest him after a nun had filed a police complaint accusing him of sexual assault. He got bail after 25 days. Six months passed before a chargesheet was filed. That was two months ago, in April. In early June two senior police officers investigating the case were transferred. The protesting nuns attributed it to Franco’s “political and financial influence.”

How does a sinner get so much influence? Why do people, including Catholics, ask the question Henry II made famous: Who will free me from this turbulent priest? Ironically, only cartoons try to provide an answer. A cartoon by Manjul showed Franco standing tall in full regalia while a police officer prostrates before him and, crawling on the ground, says with folded arms: “Let us start your interrogation.” Life has become a cartoon.