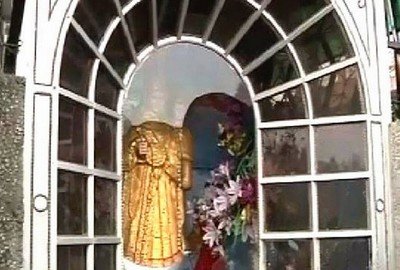 The incident came to light in the morning when Father Balraj reached the church.

A Marian grotto of a parish church under Delhi archdiocese was vandalised by two unidentified men in west Delhi’s Vikaspuri area Wednesday morning.

The incident, which took place at 4:19 Wednesday morning, was caught on CCTV camera. Police have registered a case and efforts are on to nab the attackers, police said.

Two persons came on a motorcycle and one of them entered the church’s premises and broke a glass pane. "He is seen leaving in the footage only to return a minute later and pulling down a statue,” said Assistant Father Balraj of ‘Our Lady of Graces Church’ where the incident took place.

The incident came to light in the morning when Father Balraj reached the church.

“A police team led by senior officials soon rushed to the spot. A crime and forensics team picked circumstantial evidence from the crime scene. We have recorded the statements of Father Balraj and other people and a case has been registered,” said a senior police official.

Police have taken the CCTV footage in its custody and efforts are on to identify and nab the two persons.

Christian leaders said this was the fourth attack on Delhi Catholic church in less than 45 days. After two weeks after the Dec.1 incident, stones were pelted at another church and during Christmas season crib of a parish was set on fire.