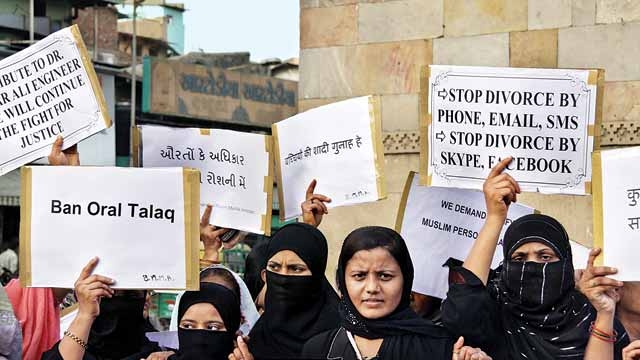 (Note: Yes a radical reinterpretation of Quran is needed to wean the ‘truth’ from fossilised dogma. “Unfortunately, AMU has been inefficacious in this role of being the incubator of social reforms” according to the writer. If two centuries of study and discussion has not succeeded to make a step forward, it is unlikely any change will happen in the near future. Indian Muslims must learn at least from other Muslim countries which have adapted themselves to the demands of gender equality and justice. A secular government in India should stop playing votebank politics by denying justice to women and placating conservative

religious heads for the sake of getting the votes of the whole or majority of the community. james kottoor, editor)

Today will be celebrated as Sir Syed Day by Aligarians across the world, to mark the 199th birth anniversary of a revolutionary man. It is important to introspect how far we have fulfilled his vision. He stood for modern education, scientific temper and reinterpreting Quran in light of modern knowledge.

For Sir Syed, the trauma of Indian Muslims after the failed 1857 uprising against the British called for education and social reforms among Muslims in India. He drew upon Islam’s rationalist tradition, and advocated a radical reinterpretation of Quran to make it compatible with post-Renaissance western humanistic and scientific ideas, and also to wean the ‘truth’ from fossilised dogma.

Aligarh Muslim University stands testimony to Sir Syed’s quest for reforms in education. It has been the fulcrum of education amongst Muslims in the subcontinent. AMU as an educational institution not only weathered the storms of Partition but also progressed from strength to strength. However, the vision of Sir Syed went beyond an institution to impart education to one which would spearhead social reforms amongst Muslims in the subcontinent. Unfortunately, AMU has been inefficacious in this role of being the incubator of social reforms.

Though the university boasts of a theology department, it functions more as a centre for management of religious life in the campus than for reformation of Islamic jurisprudence in the country. Consequently, wean the ‘truth’ from fossilised dogma.

Interestingly, many of the laws that Muslims in India are so sensitive about are actually a result of the conservative interpretations by colonial British judges. The Britishers during the period 1820-57 were at the forefront of reformation of many religious practices in the subcontinent. This included the abolition of sati and support to widow remarriages. However, this interference in religious practices was perceived to be a major reason for the revolt of 1857. As a result, post 1857, the Britishers were wary of taking up cudgels for social reforms and compromising their own position, and subsequently they sided with the conservative and orthodox sections of Indian society.

This led to a very orthodox codification of Muslim personal laws. The judgment of the Bombay high court in the case of Tajbi Abalal Desai vs Mowla Ali Khan Desai (1917) by the B Scott and Beaman bench is a quintessential case in point, as it laid the foundation for a conservative polygamy law. Orthodox codification is also exemplified in the Muslim Personal Law (Shariat) Application Act of 1937.

Post-Independence, the personal laws of other religions were amended and reformed in the face of the stiff resistance from conservative sections of society. However, successive governments thought it best not to intervene in the domain of Muslim personal laws and left their interpretations in the hands of the Muslim Personal Law Board.

This has led to a situation where Muslim personal laws in many of the perceived conservative Muslim countries, including Saudi Arabia, Turkey, Pakistan and Iraq, were reformed and many practices including triple talaq and polygamy were either banned or restricted; but in India these practices and the Muslim personal laws still reflect the colonial orthodox interpretation.

With successive governments keeping a safe distance from getting involved in the reformation of Muslim personal laws, under normal circumstances the onus would lie on the liberal intelligentsia. However, post-Partition such a Muslim intelligentsia was non-existent in India, as the elite among the Muslims had migrated to Pakistan. The absence of such a pressure group further contributed to the lack of a voice for social reforms among Muslims.

In this scenario, AMU had a very crucial role to play. However, AMU, grappling with its own existential questions and identity crisis could not provide the role Sir Syed Ahmed Khan had envisaged for it and ceded space to the Deoband and other more orthodox centres in the country.

Recently, issues related to polygamy have been contested in the Supreme Court and the government has contended that the validity of triple talaq and polygamy has to be seen in light of gender justice, equality and dignity of women. It is a great opportunity for Muslims in India to reimagine and reinterpret their personal laws to correctly reflect the teachings of Quran and not the blinkered interpretation of some colonial British judge. Sir Syed had stood for such a reinterpretation in the 19th century but we have failed to achieve it in two centuries.

AMU needs to step up and play a very important role, not just by providing the correct interpretations of Quran but more importantly by being the harbinger of a Muslim social revolution. The university has immense goodwill among the Muslim community in the country and by being the voice of change it can convince the Muslims of the country to embrace this reformation. The chances of Muslims consenting to any change in personal laws are much higher if AMU spearheads it.

Two centuries is a very long time. Sir Syed must be turning in his grave (located in the AMU campus itself) that what he stood for is still only being read as the ‘Aligarh Movement’. If we are able to reform the laws related to triple talaq and polygamy and bring them in consonance with the laws in liberal Muslim countries before next year’s bicentennial celebrations of Sir Syed Ahmed Khan, it will be the greatest tribute to the man. AMU must honour the Sir Syed legacy by spearheading reform in Muslim personal laws