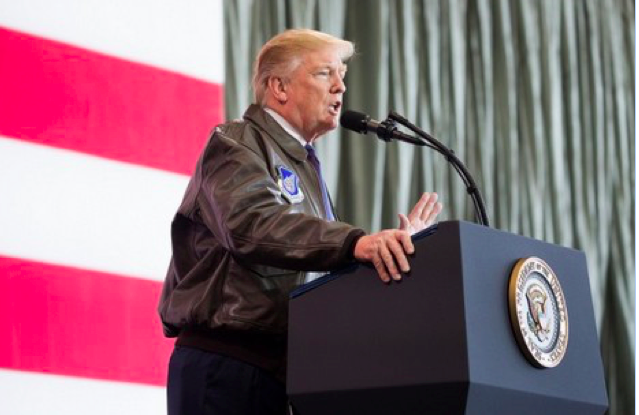 What about two top world democracies on policy decisions? “It is better to shout at each other sitting around a table than to shoot at each other”, they say.

This is done only in the UN. This the basic rule of free and fair dialogue and group discussion, heated or cool. This is also the golden rule that should guide all so-called democratic nations when each country discusses national issues with its own people and more precisely when they engage in diplomatic discussions with other independent nations.

American president Trump is a bête-noire, a resounding exception to all these universally accepted democratic  shining traits of  “educated illiterates”. You can’t dialogue when you don’t accept the other as an equal. This is brought out best in an editorial in La Croix, French daily editorial on Trump: “A balance sheet after Trump’s first year”(Read it below), which points out that Trump usually starts his dialogue with the assertion: “America First.”

As long as one stays adamant to stay “First” among nations – rich or poor, big or small — that  are considered equals in principle, where is room for equality and mutual respect which ought to be the starting point of all interpersonal, inter-political and inter-religious and  international negotiations? Who should remain ‘first’ is not something to be decided by an arrogant or de-facto rich and powerful partner in the comity of nations but by all participants in a dialogue.

What is happening at the global level has salutary  lessons for political and religious bodies  around the world. In India, on the political horizon, we  see more heat than light and sound  than sense  due to acrimonious, divisive and adamant positions taken by parties in dialogue driving the nation into a state of anarchy. It is made worse or caused by autocratic decisions of Modi and Amitsha leadership on demonetization and GST introduced  and imposed without prior popular discussion.

On the religious front, in the Catholic church vertical dialogue between the leadership and the lay people is practically nil or stage managed. Peace, progress and smooth resolution of issues are possible only through cooperative dialogue on equal footing between conflicting parties whether in Church or society.  james kottoor, ccv editor.

Please read below the French editorial on Trump rule

The American president has succeeded in re-mobilizing those people around the world who continue to believe that democracy is based on an ethic of discussion.

“America First.” The slogan illustrates the focus of the White House under Donald Trump. The blindness that he has brought to the world’s number one power is now starting to show its effects.

A year after his election, Trump has already succeeded in weakening the logic of partnership that remains so vital in an unstable world. The United States' withdrawal from the Paris Climate Agreement is the most striking example of this.

This climate-skeptic approach illustrates the extent of the US president’s short-sightedness resulting from the influence of the coal lobby and propelled by a selfishness that is hardly disposed to negotiate over “its way of life".

This same sort of blindness also infects Trump’s approach to the North Korean and Iranian nuclear dossiers.The apparent strength of the United States has encouraged the “hawks” to brandish a “big stick” that leaves no room for any form of negotiation.

On the other hand, by moving ahead and flexing his muscles, it is true that the US president has woken the world from a somewhat lazy slumber.

Nevertheless, the most decisive benefit arising from the current situation may well be found elsewhere in an unexpected location.

Behind the chaos that has resulted from Trump’s policies, resistance is beginning to develop as well as a desire for new forms of cooperation and the building of momentum to counter his destructive approach.

There is still room available for negotiations to avoid the abyss. Even in the United States, many voices are being raised in an effort to limit the damage from Trump’s presidency.

Donald Trump has succeeded in re-mobilizing those people around the world who continue to believe that democracy is based on an ethic of discussion. This will ultimately lead to new forms of cooperation.