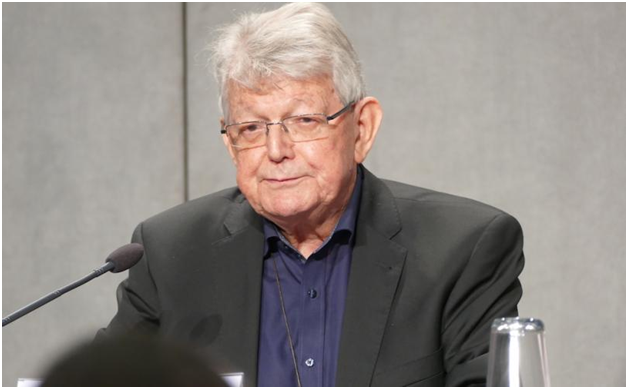 Birth of child is a painful tedious process. How intense it is, only women can tell! That seems to be what is happening at the Amazone Synod.

The group of St. Gallen Mafia in Switzerland,led by late cardinal Martini of Milan, Walter Kasper, Cardinal Godfried Danneels, Francis and others were working on Priesthood for the married already from 1970s, preparing the ground slowly, not to precipitate a possible schism in the Church. They wanted to introduce ‘Married priesthood’ as an exception on the sly, responding to an urgent need. “Amazone situation’, has now provided it, with the on going synod.

This was what the liberal wing in the Church has been working for years  to prepare the ground, that is, the mentality of the majority “little by little” for years first to get “women deacons” accepted; then priesthood for married men and women in the priesthood in this ongoing Amazon Synod. Hence the headline indicating: “reaching Climax”.

In the light of John Paul ii’s encyclical of  1994  Ordinatio Sacerdotalis, saying “the Church has no authority whatsoever to confer priestly ordination on women” present pope or cardinals could respond to an American or any one asking: “When is women priests coming?” nothing except, “Not in this millennium!”, expressing total uncertainty and wonder.

In any case Bishop Erwin Kräutler,(See his picture above) a vocal proponent of married men and female priests is now the principal author of the synod’s controversial working document and he claims that “two thirds” of Amazonia’s bishops favor ordaining married men, and “many” synodal fathers want a female diaconate. So let the suspense continue, until the synod concludes. james kottoor, editor CCV.

October 16, 2019 (LifeSiteNews) — The St. Gallen mafia’s long war to revolutionize the priesthood has now reached a decisive moment. The showdown for the soul of the priesthood is here, raging at the Amazon Synod.

Soon after the synod started, Bishop Erwin Kräutler admitted that the synod was “maybe a step to” women priests. The explosive confession came after he had already endorsed a female diaconate and said that “indigenous people don’t understand celibacy” at a synodal press conference. Notably, just a few months earlier, Kräutler participated in a secretive pre-synodal “study meeting” proposing the ordination of married men and a female diaconate. Four of Kräutler’s fellow participants — Cardinals Hummes, Baldisseri, Czerny, and Schönborn — are now on the commission responsible for the synod’s final document.

Another participant in the private study meeting was Cardinal Walter Kasper — a key alumnus of the St. Gallen mafia.Back in the shadows, often invisibly, the St. Gallen group has slowly laid the groundwork for today’s revolution. They began in the late 1960s and early 1970s, individually militating for the ordination of married men. Later — according to the authorized biography of mafia alumnus Cardinal Godfried Danneels — the group explicitly discussed the female diaconate during their secret annual meetings in Switzerland. The biography calls this diaconate a crucial step toward greater openness to women’s ordination. According to the book, Danneels thought such ordination was conceivable from a biblical and historical standpoint, but he carefully avoided saying so in public.

Cardinal Carlo Martini, S.J. — the mafia’s leader and Pope Francis’s “precursor” — was less chary. In the early 1990s, he gave an incredible series of interviews disclosing his plan to revolutionize the priesthood. In a 1994 interview with Le Monde, the Jesuit asked: Was it not possible to discern an opening of the priesthood to married men? He insisted that the ordinations would only happen on an exceptional basis — presaging a major talking point of the Amazon Synod.

On female priests, Martini admitted in 1993 that a sudden change would risk schism, as Peter Hebblethwaite’s The Next Pope recalls. Nevertheless, Martini said:As for the issue itself, I think we should come to it little by little, to gradual solutions that will satisfy not only the most progressive but also the majority. …But I can foresee decades of struggle ahead.

Then, obliquely insinuating a radical change after those “decades of struggle,” he quipped: “When people ask me, and it’s usually Americans, ‘Will we have women priests?’ I answer: ‘Not in this millennium!’Some have speculated that this interview may have helped provoke Pope John Paul II to release the 1994 document Ordinatio Sacerdotalis, which declared that the faithful must “definitively” hold that “the Church has no authority whatsoever to confer priestly ordination on women.”

Martini remained unfazed, calling the letter “decisive” even as he worked to subvert it. As Hebblethwaite points out, just three days after that text’s release, Martini told a Eucharistic Congress in Siena: “The Pope has said nothing about the ordination of women to the diaconate.” Asserting the presence of a female diaconate in the past, he announced: “I think that a certain space remains open.”

Later, in Night Conversations with Cardinal Martini, the Jesuit again praised “deaconesses” and said we “should not be unhappy that the Protestant and Anglican churches ordain women and are thereby introducing something important into the arena of wider ecumenism.” He explained that he personally encouraged the Primate of the Church of England to have “courage” on the issue of women’s ordination and to “take a risk that could also help us treat women more fairly and understand how things might develop further.”

The mafia’s plot to pursue the ordination of married men and women “little by little,” on the sly, via years of toil and misdirection, has acquired new life under the Francis pontificate. According to Paul Vallely’s Pope Francis: The Struggle for the Soul of Catholicism, when Kräutler asked the pope if married men could be ordained, the pope pregnantly replied: “You tell me.” Later, when an adviser asked about married priests, Francis answered: “One thing at a time.” Kräutler — a vocal proponent of married and female priests — went on to become the principal author of the synod’s controversial working document. He claims that “two thirds” of Amazonia’s bishops favor ordaining married men, and “many” synodal fathers want a female diaconate.

On female priests, the pope, in fact, sounds eerily like Martini circa 1994. Like Martini at that time, Francis has soothingly reaffirmed, in principle, the ban on female priests — even as his pontificate, in practice, advances the female diaconate of the mafia’s dreams. It is, to borrow a general insight from historian Roberto de Mattei, yet another instance in which papal praxis is crushing abstract, rarefied theory.

According to Marco Politi’s La Solitudine di Francesco, various members of the pope’s study commission on the female diaconate feel that the pope is in favor of the proposal, based on their meeting with him in 2017. One member has expressed faith in the pope but recognizes that waiting may be necessary so as to avoid jeopardizing their work. Another has spoken of Francis’s gradual “steps.” Notably, when the commission failed to agree on whether deaconesses historically had a sacramental ordination, Pope Francis said: “Let us go forward. I am not afraid of study.”

Today, Kräutler believes it’s realistic that the synod will clinch “at least the female diaconate.” Perhaps that is why Pope Francis is speaking so loosely about being unafraid of schism: he knows that a bombshell is about to rock the Church. As de Mattei recently pointed out, revolutions historically have long incubation periods before blowing up. He believes that the current Church revolution has been building pressure for 50 to 60 years and that “it is possible that all will explode very, very rapidly.”

But even if the synod does not dramatically endorse an ordained female diaconate, various voices point out that a lesser “ministry” for women would still ready Catholics for female priests. As John-Henry Westen puts it:

[S]ince women already serve at the altar in liturgical garb; since women are already permitted as readers at mass; and since women already act as extraordinary ministers, a move to give women a named ministry and a liturgical garb for Mass with perhaps also the possibility of preaching seems not so far-fetched. But once we’re there, there will be no holding back women’s ordination, since it will already be there visually and symbolically. In the absence of a priest, a woman in liturgical garb could lead the prayers, readings, Gospel, give a homily, and just use the already-consecrated hosts from the tabernacle, as Pope Francis mentioned already happens in some places in Germany. By that point the look and feel of the all-male priesthood will be all but destroyed, leading quickly and inevitably to false women’s ordination.

Likewise, endorsing the ordination of married “elders” — the proposal of Bishop Fritz Lobinger — would not only attack celibacy, but also pave the way for female priests. As Lobinger explains in Like His Brothers and Sisters, ordaining this new class of priests “will change the image of priesthood,” gradually replacing a “clerical” form with a “community-based model.” “This would make the ordination of women much more attractive to many women and more acceptable to men,” he boasts.

In other words, even if a massive synodal earthquake doesn’t convulse the Church, the revolution will just build up more pressure, tremors, and foreshocks — letting the St. Gallen mafia’s long war against the priesthood rage on.