After nearly 500 years, Our Lady of Guadalupe still has something to tell us 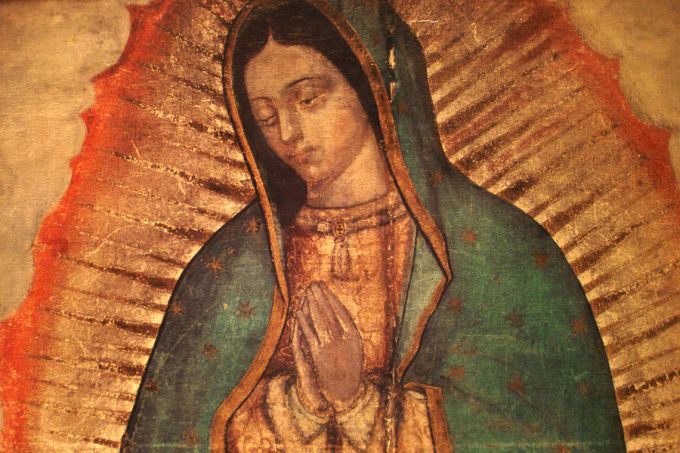 By Hillary Mast. Los Angeles, Calif., Nov 6, 2015 / 12:24 am (CNA).- The miraculous image of Our Lady of Guadalupe is centuries old and her message to St. Juan Diego has been translated into numerous languages over the years. Countless books have been written about the apparition, and the tilma itself has been intensely scrutinized by scientists.

So what more can we learn about Our Lady of Guadalupe and her message?

Plenty, says Supreme Knight Carl Anderson, who along with postulator for St. Juan Diego’s cause for canonization, Msgr. Eduardo Chávez Sánchez, has produced the new documentary, “Guadalupe: The Miracle and the Message.”

“I think most people have very little understanding of the codex within the image itself, and the documentary helps explain exactly why the symbols contained within the image are so important and had such resonance,” Anderson told CNA.

What many people don’t realize, he said, is that the miraculous image on the tilma is actually a kind of map full of symbols that the Aztec people would have readily recognized.

The new film is based on Anderson and Msgr. Chavez’s New York Times bestseller, “Our Lady of Guadalupe: Mother of the Civilization of Love.” Narrated by actor Jim Caviezel, the documentary brings the story behind one of the most easily recognized religious images to life with 3D animation, live action reenactments, and expert commentary.

“I think anyone who watches this film will learn things they didn't know, and will come to a greater appreciation of Our Lady of Guadalupe,” Anderson said.

The documentary shows that while Spanish conquistador Hernan Cortez had outlawed the practice of human sacrifice, the Aztecs were witnessing the collapse of their empire, the enslavement of their people by the Spaniards, and catastrophic loss of life due to virulent disease ripping through their population.

“At the time of her apparition, the indigenous people of Mexico were anticipating the end of the world,” Anderson said.

“To understand the impact that Our Lady of Guadalupe has on the native population, you really have to put yourself in the position of these people at the collapse of the Aztec Empire and what their understanding of religion really was,” he explained in the documentary. “We have to remember the horrific face of the Aztec deities that were there to receive the human sacrifices.”

Spanish missionaries also recognized the dire situation in Mexico City. Bishop Juan de Zumarraga was so disgusted with the abuses carried out on the native population by the new Spanish government, that he felt that unless a miracle occurred, Mexico City would be lost. He even went to so far as to order all the priests to abandon the city until the government changed its ways.

Thankfully, a miracle did come by the way of the Virgin Mary appearing to the humble peasant, Juan Diego, telling him to have Bishop Zumarraga build a shrine for her on the top of Tepeyac Hill.

In the years that followed, even in the midst of ongoing strife with the Spanish government, one of the largest conversions in the history of the Church took place with 9 million natives being baptized.

“Her apparition, her message, and the codex on her tilma – the images within the image that would have been so clearly read by the indigenous people – introduced Christianity in a way that invited the people of Mexico to a new hope in the Gospel of Jesus Christ, presented by his mother,” Anderson said.

For example, the blue-green cape that Mary wears in the image would have immediately indicated to the native people that she was someone important, since that was a color only an emperor could wear. Having her hair down was a style that only virgins would wear, while the black ribbon around her waist indicated she was pregnant.

“I think her message of love, her apparition as a pregnant woman, and her model of a civilization of love are all things that have at their heart the call to build a culture of life,” Anderson said.

“Not only in her image, but in her choice of Juan Diego as her messenger, she showed a profound love for every person, even the smallest, the most humble, those some saw as inconvenient. Combined with her apparition as an expecting mother, with an unborn child, her message is unmistakable.”

Although she is often associated with Mexican culture, Anderson said that Our Lady of Guadalupe was and continues to be a model of evangelization for the world.

“She not only transformed America into the Christian hemisphere, but she remains a model of inculturation, of dialogue between cultures, of healing, and above all of love,” he said. “She lovingly calls us to the Gospel message of her son. It is no accident that her image is the most recognizable religious icon in this hemisphere and that she is revered from Alaska to Argentina.”

As a part of ABC’s Visions and Values Series, the documentary will air onABC affiliate stations nationwide between Oct. 11 and Dec. 10, right around the respective feast days of St. Juan Diego and Our Lady of Guadalupe.

“(This) means that millions of Americans will have the ability to see it on network television, and I think the fact that ABC is airing it speaks to the fundamental importance of Our Lady of Guadalupe in our country – an importance that is understood not only within the Catholic world, or the Hispanic world, but the media world as well,” Anderson said.