Aadhaar everywhere except for political donations 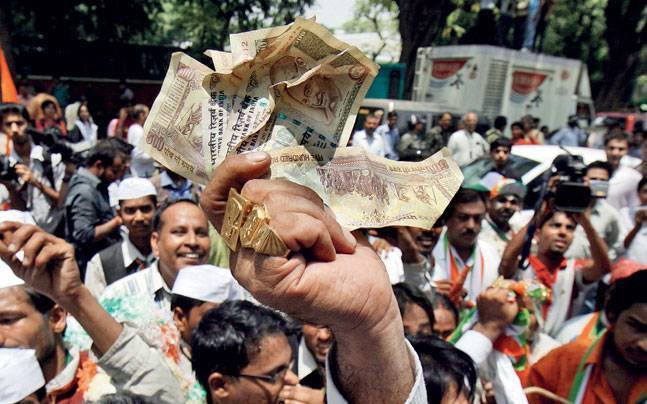 A very timely article in the Statesman Kolkata on how political parties whether in the government or in opposition, are playing with its citizens by making Aadhaar Card mandatory for almost everything under the sun, while keeping themselves outside its ambit as far as donations to their party funds are concerned – zero accountability. No wonder they try to divert citizens' attention to Cow Vigilantism or Jallikattu. In the absence of the Election Commission being unable to control or put a cap on the spending by political parties during elections (both Central and State), it is high time the Supreme Court stepped in (based on a PIL) and did away with the immunity of the political parties.  After all they are to serve their citizens and are not elected as peoples' representatives to serve themselves at the expense of their citizens.  Isaac Gomes, Asso. Editor, Church Citizens' Voice.

Ordinary citizens need to show Aadhaar cards everywhere and link them to bank accounts and mobile phones but the same conditions do not apply to polilticians and political parties while seeking political donations. Even as the government is making it almost impossible to carry out any transaction without the Aadhaar identify, sources of political donations will, however, remain undisclosed.

Justifying this Manohar Parikar, Goa chief minister, recently said linking big financial transactions to Aadhaar numbers would be detrimental as donors could face vandetta by rival parties.  "Small donations no one will bother whether you link it to Aadhaar or whether you take income tax certificate. If you link big amounts to the source, there is every likelihood that the next government, if it changes hands, may target the company and the very noble idea of official donation will be driven under" Parikar said last week.

Speaking to the Statesman Yashwant Sinha, a BJP leader and former Union finance minister, countered Parikar, stating, "whichever government comes to power, will come to know the donor. It is only the public who will not come to know." There is usually no transparency regarding political contributions. In most instances, people are ignorant about the identity of both the giver and the receiver as political parties are not subject to any form of independent audit.

Union finance minister Arun Jaitley, with an aim to bring in some transparency, had capped anonymous cash donations to parties at Rs 2,000 from Rs 20,000. The Finance Bill also introduced a concept of an `electoral bond' by which corporations can purchase time-limited bearer bonds from banks and transfer these bonds to registered bank accounts of political parties. While these funds will flow through the banking system, corporations are neither obliged to disclose their purchases nor are parties required to report their deposits.

However, the Central Government belatedly attached two amendments to the Finance Bill.  The first eliminates the cap on corporate giving (which previously stood at 7.5% of a corporation's net profits over the previous three years), while the second abolishes the provision that firms must declare their political contributions in their profit and loss statements.