A vision for the church in India 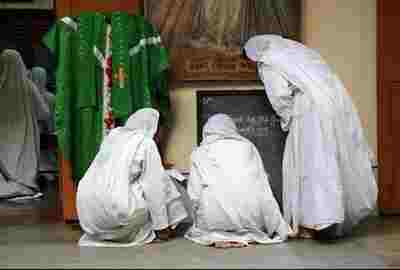 Catholic clergy needs to evolve to keep up and meet new challenges as society changes.

The world is at a tipping point and so is India with a majoritarian government in power with another idea of what India is.

The church is also at a turning point — in "mutation" — as it re-defines itself, away from canonical institutions to a more evangelical presence in the world.

When Pope John XXIII convened the Second Vatican Council in 1962, he said it was to "update the church" (aggiornamento). But as we realize today, the problem is not so much "updating" but more "mutating" — as when a caterpillar turns into a butterfly or a fetus becomes a child and then an adult.

In other words, the change is not just quantitative, but qualitative, not just incremental but of a different kind.

So the question is really about discontinuous change: change that doesn't flow from the past but is in rupture with it. Such change is rapidly happening around us, whether we're speaking of the church, nation, or the world.

Signs of the Times

Here are a few characteristics of our "age of discontinuity," listed in four or five key words: Globalization. Digitalization. Inter-faith relations. Minorities. Ecology.

Globalization refers to our shrinking world, where physical distances are made shorter (thanks to automobiles and air travel) and mental and affective spaces are easily filled (with television, telephony and the internet).

This has changed the way in which we teach and learn, and has had enormous impact on traditional patterns of education.

Today this technology has "mutated" into the social media where millions keep informed, entertained and in touch by texting on their smartphones. Its presence is an excellent model of collaboration with others — across the lines of race, class and gender.

Inter-faith relations are the new priority, as religion makes a comeback onto the world's stage. As Hans Kung reminds us, "There will be no peace between nations until there is peace between religions."

While terrorism is a worldwide phenomenon, based on a fundamentalist understanding of religion and politics, its local form on the Indian sub-continent is in communalism and the persecution of minorities.

Yet another aspect of today's "discontinuous" age is the rise of minorities. Today the voices of even small and dispossessed groups insist on being heard.

Among these, women demand greater participation at every level: socio-political and ecclesiastical — demands which grate against any sense of clericalist entitlement.

In society at large, the movement for the rights of sexual minorities has thrown societies into turmoil everywhere. Not only are there new ideas to grapple with; there are also new values to consider.

Finally, a word about environmental concerns, the biggest issue of our time, still resisted by many who refuse to address their implications (polluted air and water; an expanding ozone hole; rapid desertification; global warming).

The discontinuities of the present age compel us to re-visit and re-interpret both our ministries and our spiritual motivation.

The end of the church as we've known it?

This is the culture in which the church finds itself today — not just changing rapidly, but also mutating, transforming into something unexpected.

Much of this is a Western scenario, and the more conservative among us will sigh with relief and say: But India is different. India is better.

However, there is discontinuity in Indian society too. There's a new idea about what this country could and should be.

The idea of India we grew up with, enshrined in our constitution, is that of a sovereign, secular, socialist and democratic republic.

It is rivaled now by another idea — India as a majoritarian Hindu nation, aggressively proud of its past, confident of its future as a super power, a nation in which minorities have no space.

All this poses a challenge to those who believe in secular and socialist values. Many intellectual and activist groups have risen to meet the challenge — however, there are not too many church groups among them. Why?

For most in the India church, their educational institutions and parishes consume the bulk of their personnel, physical energy and financial resources.

They also clutter their imagination, by creating an operational framework that discourages other initiatives.

Frequently it is not "mission" that motivates us, but "maintenance." Mission is unpredictable, and today only brings persecution and hostility.

Maintaining our institutions however, brings us respect, flattery, wealth and security. Have we made a "Faustian bargain" here? Are we in danger of losing our souls?

Today, whether we are aware of it or not, the changing values and the context of a mutating society have affected the church everywhere.

Take parochialism or regionalism. The more the church and society indigenizes, the more it projects the primitive Indian values of caste, tribalism and feudalism.

Position, prestige and power have become obsessions in mainstream society, bringing in their wake widespread corruption.

Clericalism's most toxic effect in India is seen in the sexual misdemeanors of priests with women (the pedophile scandals of the West are yet to appear much in India).

In this, a sense of entitlement merges with India's traditional patriarchal attitudes. Women are meant "to serve the church" by giving in to every demand of the clergy.

To sum up: dysfunctional behavior ("viruses") by clerics and religious today may be seen as a reflection of the change of values in society at large. It may just be Catholics in India don't wish to stand apart and confront society; they wish to belong.

As I was putting a closure to these thoughts, I came across a stimulating article in the "Times of India."

The author, Kanti Bajpai, was addressing some Japanese businessmen on opportunities in India. Someone in the audience asked, "Thank you for telling us where India is today. But where does it want to be tomorrow? What is the India dream?"

We can tell our leaders: Thank you for telling us where the church in India is today ("the strengths and viruses"). But where does it want to be tomorrow?

What is the India dream? That's the question.

I quote Bajpai again, but modify his answer slightly: "We Catholics in India dream of three things: modernity, mission and a well-managed country." Notice none of these words is overly ambitious. They are modest, attainable goals.

Anyone with their eyes open can see storm clouds on the country's horizon: the growing communalization of our polity, the marginalization of the minorities, ecological disasters in the making, the decrepitude of our educational institutions.

These things call for a collaborative mission — not just with other Catholics, but also with men and women of skill and goodwill everywhere.

Or is it simply that the world has changed to much and too fast for us in India, leaving us fumbling with yesterday's answers to tomorrow's questions?

Father Myron J. Pereira SJ lives in Mumbai, where he is a writer. He can be reached at pereira.myron@yahoo.in, and at his website www.myronic.org.