A quick political analysis of Congress under Sonia for reflection! How Jyotiraditya Scindia ran out of ‘patience and time’ with Congress! 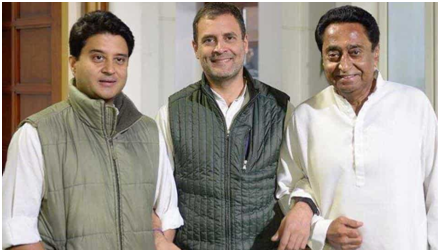 Yotiraditya Scindia’s decision caps weeks and months of speculation about his plans. In his letter to Sonia Gandhi, Scindia alluded to developments in Madhya Pradesh Congress over the past year that he indicated, had led him to take the decision to walk out of the party.

Catastrophic downfall of Congress under Sonia, sitting tight like a hen to hatch all its eggs and one hatched out chick Scindia, wriggling out from under the heavy weight and standing tall on his own feet, is thought-provoking. The young Congress Turk quit the party with 22 MLAs and will join BJP say reports.

Sources for this quick analysis are reports flooding the websites and reports in latest dailies, giving prominence to Scindia’s emergence  as an honest, independent Indian political leader and fast disintegration of Sonia family congress.

For a comparison you may think of Pope Francis under the present “Constantinian Church” weighed down by heavy weight of Bishops with honorific titles and imperial authorities! Francis is trying might and main to wriggle out through Amazon synod hole – half out and half under — and facing an avalanche of criticisms from the conservatives to block him.

“Two most powerful warriors are patience and time,” Tolstoy. Patience is waiting, but not passively waiting. That is laziness. Keep going when the going is hard and slow – that is patience. Who is doing the right thing: Scindia or Francis?   james kottoor, editor ccv.

Read below an attempt at analysing of

the emerging political scenario in India!

Soon after the party’s victory in the December 2018 Madhya Pradesh assembly elections and after days of hectic deliberations over the selection of the chief minister, the then Congress president Rahul Gandhi had posted a picture(see cover photo) with Jyotiraditya Scindia on his right and Kamal Nath on his left — with a line borrowed from Leo Tolstoy’s famous quote.

But after 15 months, Scindia had run out of patience with the Congress and on Monday he decided to end his 18-year-old association with the party.

In December 2001, months after his father’s untimely death, Jyotiraditya Scindia joined the Congress. On Tuesday, on his father’s birth anniversary, Scindia embarked on a new chapter in his political journey when he announced his resignation from the Congress. Suave, educated, untainted by corruption and boasting of both political lineage as well as a connection to the grassroots, Scindia has long been the modern face of Indian politics’ grand old party

At 49, Scindia, a Harvard and Stanford University alumnus, was seen as one Congress’s pillars of strength. He was part of a close-knit group that included former Congress president Rahul Gandhi, Sachin Pilot, Murli Deora and Jitendra Prasad. A fiery orator, he often led Congress’ attack against political rivals in Parliament and was made the chief whip of the party in the 16th Lok Sabha.

The grandson of the last maharaja of Gwalior Jivajirao Scindia, Scindia joined electoral politics in 2001, after his father and Congress leader Madhavrao Scindia was killed in a plane crash. The young Scindia filed a nomination from his father’s constituency of Guna in Madhya Pradesh in 2002 and defeated his rival from the Bharatiya Janata Party, Desh Raj Singh, by a margin of 450,000 votes. Scindia would win four straight terms from Guna, but lost the seat in the 2019 general elections – a loss attributed by his loyalists to infighting within the Congress.

Scindia stays put in his conviction saying, fighting for the people’s issues is his ‘dharma’. “Let him,” was Kamal Nath’s response, escalating the tension between the two and it peaked as the Rajya Sabha elections approaching as three vacant Rajya Sabha seats from Madhya Pradesh are going to polls on March 26 out of which the Congress and the BJP were sure of getting one each and the third one was heading for a contest.

His last engagement in the Congress was on February 26 when he attended a CWC meeting on Delhi violence. In his resignation letter he wrote:  “While my aim and purpose remain the same as it has always been from the very beginning, to serve the people of my state and country, I believe I am unable to do this anymore with this party(Congress),” he said. When crime is dime a dozen in politics and given this choice whom will you choose to lead in Madhya Pradesh, Nath or Scindia?

Scindia quits the Congress after serving it honestly for 18 years! CCV had batted for Scindia and Pilot, young leaders, in MP and Rajastan.What is going to be the fate of India: a ‘Congress-mukt Bharat?’ What the whole nation wants is a “Corruption-mukt, Violence-mukt Bharat’, a Bharat of Unity, living in peace and harmony. Possible? james kottoor, editor ccv.