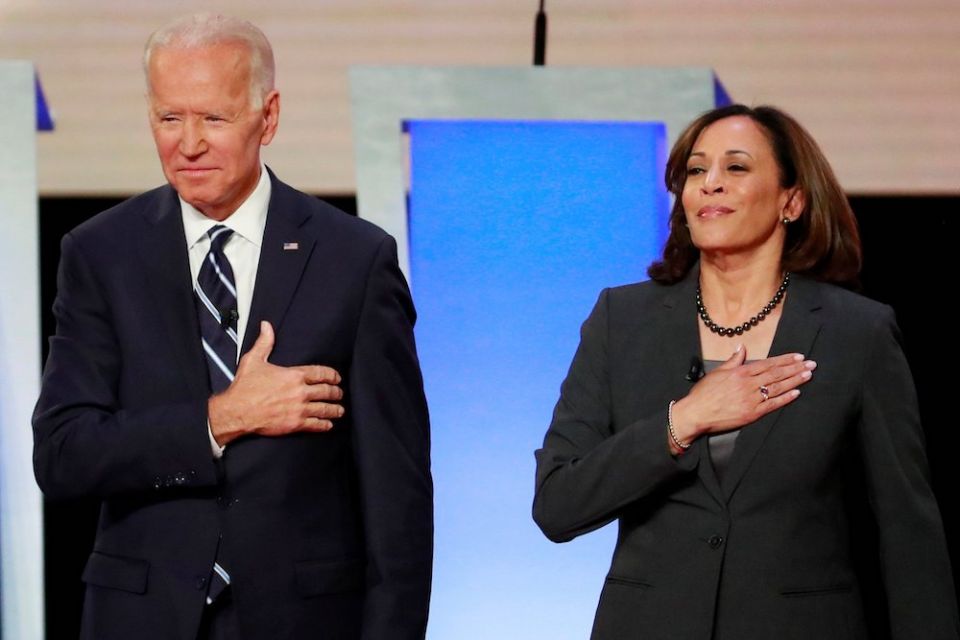 l products of our environment. Environment means from today’s background to our global setting. We live today in a “global village” thanks to internet which connects us instantly to the other side of the globe as in a village 100 years ago!

Old need not be gold!

So our language and conversation must suit our present changed situation. Lived habits are hard to change, but we must change our thinking, speaking and acting in our religio-political-social areas, instead of sticking to the saying “old is gold!”

I myself have undergone radical and unbelievable changes from my childhood days after a lived life of 86 years! So must all of you  have from person to person.

The article below is taking a look from Biden’s Irish Catholic background. JF Kennedy was the first Catholic to become US president. WASP (White Anglo-Saxon protestant) was the religio political force that ruled roost from the discovery of America.

This scribe also was born into a Catholic family, but facts, lived experience and reason have forced me change my childhood views beyond recognition on all and sundry. Since I grew up in a community of Brahmins, Nambudiries, Nairs, Pulayas and Parayas, respecting the religious practices of each came naturally to me.

A Bhramin lights a lamp at dusk, a Christian says prayers in the evenings. One goes to temple, the other to a Church. Sometimes the Namboodiri family used to entrust us with donations to be offered in our Church since they were expected to go to temple only. There was religious harmony!

Today I believe in what is good in all religious teachings but do not belong to any organized religion.  Belief in a God or ultimate cause also needs to change, I think. Such a being, if it/he/she exists should the embodiment of Love eternal,  Light eternal and and Truth eternal or briefly all should be led by Snehagraha, Deepagraha and Sathyagraha, according to each one’s insight. Religion is for private practice, not public display.

Being just a Son of Man!

In the same way I believe in the need of many political parties and I voted for honest persons in all political parties, but never became a card-carrying member of any political party. I believe in being just a very ordinary Son of Man which makes me capable of helping or serving the last and neglected sisters and brothers as an elder or younger brother  in the social ladder of a Caste infected society. In short, reason forces me to hold firmly to the   brotherhood of all humans.

Of course none of you have to accept my views. Here I hold strongly to the views of Voltaire. I have written a lot about divisive Churchianities which should be wiped out, in my view. The word ‘Catholic’ itself is a contradiction, an Oximoron, preaching one thing and practicing just the opposite! Regan became the first divorced US president and Trump did one better becoming the first twice divorced President! Where is bible preaching and church practice?

That said, read the article below, batting for a second Catholic president in America, I support positively the candidacy of Biden and Harris. You vote-in your conviction in support of parties whether in US or India. That I believe is true democracy in practice. james kottoor, editor ccv.

on  a second US Catholic President!

Thirty-three men between George Washington and John F. Kennedy served as U.S. president. Until Kennedy, all were white Anglo-Saxon Protestant men. It took 172 years for a Catholic to win the presidency.

The wait for the next Catholic president sits at 60 years — and could be longer, if former Vice President Joe Biden fails to unseat the Republican incumbent, Donald Trump.

By comparison, 140 years had elapsed before a Catholic was part of the presidential ticket, from the time of Washington's election in 1788 to the Democrats' nomination of New York Gov. Al Smith to run for president in 1928. Smith, the first Catholic major-party presidential nominee, was hounded by charges of "rum, Romanism and rebellion" by his political opponents in Prohibition-era America. Smith lost in a landslide to Herbert Hoover.

The rum-Romanism-rebellion trope was a holdover from the 1884 presidential campaign. James Blaine of Maine, a Republican, was a Presbyterian as was his father. But his mother was a Catholic, and his parents agreed to raise their sons as Presbyterians and their daughters as Catholics. One of Blaine's cousins was a nun who founded the first U.S. convent for the Sisters of the Holy Cross.

The campaign slur by a key Republican in the final week of that campaign energized Catholic voters in New York against Blaine, who lost New York and its 36 electoral votes by 0.10%. Had Blaine won New York, he would have had an advantage of 17 electoral votes — and the presidency.

JFK never got to serve his full term, being assassinated in Dallas Nov. 22, 1963 — the most recent president to be slain by an assailant's weapon.

Less than a year later, William E. Miller, a seventh-term congressman from New York, was nominated to seek the vice presidency by the Republicans in support of Barry Goldwater at the top of the ticket. That made him the first Catholic candidate for the vice presidency. He grew into such obscurity that, in the mid-1980s, he made one of the "Do you know me?" commercials for the American Express card. His daughter, Stephanie, a comedian and talk-show host, became more famous than he did.

It was not until 2012 that another Catholic appeared on the GOP ticket, when House Speaker Paul Ryan of Wisconsin ran as Mitt Romney's vice presidential pick. The current vice president, Mike Pence, was raised Catholic but became an evangelical Christian in adulthood. No Catholic, despite the Republican Party's ardent courtship of Catholics in recent decades, has ever graced the top of the ticket.

In 1968, JFK's brother, New York Sen. Robert Kennedy, launched an 11th-hour campaign for the Democratic presidential nomination. Whether he would have captured the nomination is a question left to history. He was assassinated inside a Los Angeles hotel where he had just given a victory speech after winning the delegate-rich California primary.

Sargent Shriver, an in-law to the Kennedys, was George McGovern's running mate in 1972, but the McGovern-Shriver ticket was swamped by the Richard Nixon-Spiro Agnew reelection bid.

JFK's election as president, in which he squarely took on anti-Catholic bias, broke a WASP stranglehold on the White House, and led political parties to consider characteristics other than regional difference to balance a presidential tickets.

In the absence of a Catholic sitting in the Oval Office, a sizable to-do was made over the election of Bill Clinton in 1992, as Clinton had attended Georgetown University in Washington and received a bachelor's degree there. He became the first graduate of a Catholic college to make it to the White House.

It was not until 2004, though, that another Catholic, John Kerry, captured the Democratic nomination. During primary season, before Kerry became the nominee, then-Archbishop Raymond Burke of St. Louis famously said in an interview that if Kerry presented himself for Communion while campaigning in the archdiocese, that he would refuse Kerry the Eucharist because of his "pro-choice" stand on abortion.

That issue lingered throughout the presidential campaign as other U.S. bishops and even German Cardinal Joseph Ratzinger — who became Pope Benedict XVI the following year — offered their views.

The cardinal, in a leaked memo, did not name Kerry but called abortion a "grave sin" and said Catholics who support legalized abortion should be advised by their pastor not to present themselves for Communion. Some U.S. bishops said denying the Eucharist should be a last resort; others said they would refuse Communion.

It took 24 more years following Ferraro before a woman was placed on a major-party ticket, when Republican standard-bearer John McCain made Sarah Palin his VP pick in 2008. The McCain-Palin ticket lost to the Barack Obama-Biden ticket, which made Biden the nation's first Catholic vice president. Obama, of course, was the first African American major-party nominee — and president.

Biden, the presumptive Democratic nominee, had pledged to choose a woman has his running mate, and his choice Aug. 11 of Sen. Kamala Harris of California makes her the first Black vice presidential candidate. Her mother was born in India, making Harris the first major-party nominee with a South Asian heritage.

In 2000, Joe Lieberman, a Democratic senator from Connecticut, became the first Jew on a major-party ticket when he ran as Al Gore's running mate in a close-shave election that was decided by the Supreme Court.

In 2012, Mitt Romney of Utah became the first member of the Church of Jesus Christ of Latter-day Saints to win his party's presidential nomination, losing to Obama.

Four years ago, Hilary Clinton, in a groundbreaking campaign as the first woman to run for the nation's highest office — with U.S. Sen. Tim Kaine of Virginia, a Catholic, as her running mate — lost the election to Trump. Although Clinton garnered about 3 million more votes in the popular vote, Trump won Electoral College vote 304 to 227.