A nun as a criminal lawyer 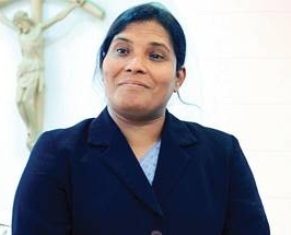 Sister Joyce’s life has been governed by the principles of two vocations seemingly at odds with one another. But she would tell you that there was no conflict at all. For her, the cross on her neck sits easy with her legal leanings.

“I will not accept that lawyers are liars. A lawyer is ultimately a human being with a fleshy heart. The individual decides which side he or she will take up. And if you follow your conscience, you’ll always be on the right side,” she says.

As a second grade student in Kolar, where she hails from, Joyce watched her aunts, nuns themselves, live their religious life. “I would come back home, put a white towel on my head, and say I wanted to be a nun too,” she recalls. Once she completed tenth grade, she joined the St Anne’s of Madras. In 1990, she was professed as a nun.

It was then the paradoxes began in her life.

She was inducted into the teacher’s training program like most of her peers. Then in 1994, on her general’s bidding, she attended a National Convention of Prison Ministries in Delhi.

She was disinterred in the seminar until a priest shared how his life changed after a visit to a prison. He said he was talkative, but after the visit he gave his tongue rest and put his ears into practice more. He became a listener who brought solace to scores of aching souls.

Captivated, Joyce knew then that she had to commit herself to the welfare and rehabilitation of prisoners. She was the last to come out of the hall. The person she met outside the hall was a very special attendee – Mother Teresa. The world renowned saintly nun asked her name. “She blessed me and said ‘You have a special call’,” Sister Joyce recalls. “The saint’s words have come true in a way.”

On her return, Sister Joyce told her general that she was no longer interested in teaching. Transfers to Tirupati and Gulbarga saw her work intimately with prison folk, providing clothes and food and material goods. “But that wasn’t enough. All they want is to be able to look at the blue sky again,” she realized. And she could do that if she became a lawyer.

But it wasn’t easy. While she obtained permission to pursue law studies (at the National Law College, Bangalore), Sister Joyce could not shirk her duties as a teacher and member of the congregation. An understanding law college professor allowed her to enroll even though she made it clear her attendance would be low.

“I only attended classes on holidays and studied all night for 20-25 days before the exams,” she admits. For five years, she juggled prayers, meditation, Mass, community breakfast, congregation duties and teaching with her law books.

She recalls a time before her first year exams when she kept all her books and notes before the Blessed Sacrament. “I said, ‘Lord I do not have any knowledge about law. You are the source of the desire in me to serve these people, so help me’.”

And help she got. She stood second in her college.

Her first case was an attempted murder. “In a drunken fit, he had hit his wife with a rock. His brother-in-law had filed a complaint against him,” she says. Having been in prison for two years, he was penitent and wanted to go back to his wife, to whom he had been married for 13 years.

“He was languishing in jail. There was no one to post bail for him, to escort him to court or care what was happening,” she recalls. After checking his records, she posted 10,000 rupees as his bail, so that he could meet his wife. “I argued that he had no criminal intent. It was an act done in a fit of anger. If he wanted to murder her he could have done it at any point in 13 years.”

Another time, she secured the release of an auto driver who had been arrested for dacoity, although he had no part in it. He is now rehabilitated and living in Chennai.

Ask her how her identity as a member of a religion and vocation that advocates truth, integrity and morality sits with a profession widely assumed to require sophistry and posturing, and she laughs.

“I always say: ‘We are all sinners. Prisoners are sinners who are caught’. So we have to have mercy and give them a helping hand. We cannot help every notorious person as that will be dangerous to society. But there are those who make reparation and turn good in prison. We need to take up for them,” she explains.

For Sister Joyce, there are only two categories of people – the oppressor and the oppressed. And her mission is to help the latter. In that, there is no conflict with the teachings of Christ.

But that is easily said than done.

Over the years, she also began to take up family matters. And often, these are cases of couples looking to separate. “As a Catholic nun, I cannot advice divorce. I have to respect the institution – it’s a sacrament in Christianity, and a sacred bond in other religions too,” she says.

But when the case is one of abuse and violence, she is clear. “I cannot stand by religion.”

When the tide turns choppy, Sister Joyce often turns to her religious practice for answers. Believing that she has to practice the value and spirit of religion, not the letter, she ensures that she vets a case thoroughly before taking it up.

“I have to stand by the truth. So I make a number of visits to the petitioner, his or her family, and understand the situation. Until I am convinced that the person is in the right and needs help, I won’t take up the case. I will always stand for the truth,” she reiterates, sitting in her small office inside the convent premise.

A particularly challenging case was of two people in a relationship who had a child out of wedlock, after which the man passed away. Fearing a scandal in Christian society, the woman procured a false certificate of marriage and of belonging to another religion so that she could claim her late lover’s property for her child.

Sister Joyce was faced with a moral dilemma. “It was very tough because she was in a pathetic state. She needed the property to financially support the child. But I could not fight for her based on lies about her religion and marital status. It was very difficult, but I refused the case,” she recalls.

“The law of God is a rule of life,” is her poetic understanding of the situation, one that has helped her balance the legalese of 350-odd cases with the language of the Bible on her desk all these years.

(This article appeared in Bangalore Mirror on June 04, 2015)