A Few Words on a Rare Saint! 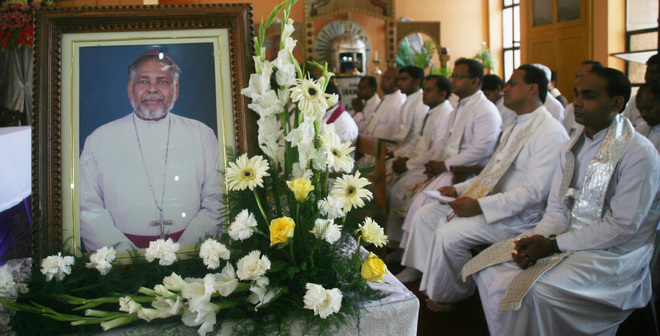 I am happy and  sad to write a few words about bishop Peter Celestine, happy because of the genuineness I found in him, sad that he is no  more present with us.

After coming to Agra mission , he was placed in the station of Aligarh.  He began to attend classes in Aligarh Muslim University (AMU). Being close to the university, it was a door for him to be in touch with Muslim professors, teachers, class mates and other good number of people.   Being a capuchin priest he enjoyed great  respect from the people.    His residence “ Fidelis Niwas” became a centre of contacts and meetings. When ever I used to visit Fr.peter there were always people in the house, sharing  or discussing one thing or other. All were mostly people of other faith especially Muslims. This atmosphere made him to grow as a man of dialogue. In the north Indian context dialogue with other religion is very important. In dialogue we do not see concrete and tangible results. One has to be very well trained for the same. Church does not give very much importance to dialogue. Even with regards to great men and women of dialogue the church was unconcerned. These people were looked with suspicion; that is why our ashrams are not functioning well.    After successfully doing his duties in Aligarh he was sent to Rome for studies. He took missiology as his subject and made deeper studies in  Early Capuchin Missions in India.   He had published his thesis and it was well appreciated by everyone. He was transferred to Sahibabad to look after a    new area which  he made  into a parish as  “ex nihilo”. He was serving in the Holy Angel School as manager and principal.  He had a very good team of Franciscan Clarist sisters who collaborated with him in building up the parish as well as the school. After a few years he was elected as mission superior which took him to far and wide places like Himachal Pradesh, Punjab  etc. Later on  we find him in Jammu Kashmir, first as an ordinary capuchin priest , then as Vicar general and later on as the second bishop of Jammu Srinagar diocese. He held this office till he retired at the age 75, in 2014. His last five years were not bright as he was suffering from diabetics and allied diseases to which he succumbed on  May O3,2015. When I write these few words I have Peter before me right from 1966,as a companion in theology, then as a co worker, later on he was my superior and finally as my bishop. Hence I have 49 years of clear memory about peter. I loved him and he too loved me. We had been very close friends. What I found in him and what impressed me most I am penning down. I am sure his life would inspire thousands of people.

1.peter had a great concern for people, men and women, boys and girls, children on the street or of well to do background. Every one could go to him. It was fine to see people of all walks of life flocking to him. He would welcome every one.Children could play round him, adults could discuss with him, college professors could enter into dialogue with him. He spoke little ,listened much and that was enough. He used to tell me that what the people need is not your advice or lecture but you willingness to listen to them. A sympathetic listener is a great councillor…. Advice is the cheapest commodity in the world.

2.Peter was a man of forgiveness. At times some tensions come up in the community, or with the people where you are working. It is quite natural. It is not anything to burn your head. I have seen him seated amidst a rebellious kind of people , who were at times angry, at times criticising, at times shouting, at times demanding certain things, moving up and down, making political issues. Peter could be cool and serene, not being apologetic or self defensive, but kid and compassionate. I  remember once a girl saying, “he is our father, to whom else we can go and shout and make our demands”. Peter understood this well. Hence he could accommodate with everyone.

3.He lived friendship. His priest companions would tease him of having too many friends. He cherished relationship. He was never lonely. His nature  was affectionate, relaxed, joyful, cheerful, with a sense of humour. He had a fine word for every one. Friends were his wealth. I have never heard of him speaking of money or bank balance. He would speak of his friends.  I have travelled distant places with him to keep in contact with friends, may be  to help them, to encourage them, or to give them some job in the school or so.

4.Spirit of suffering. As a young priest he enjoyed good health. He could drive hours on Bullet bike. I have never seen him sick till he became the bishop. Tensions in the area of administration made him sick. He became diabetic. He had gone to number of places for treatment. All sorts of medical  systems  he tried. He grew unable to contain his worries. He would never share his problems at the later age fearing of breach of confidence and not implicating others. But everyone could understand his problem. He was very soft, lenient, believing every one, probably not called for administration. He had many sleepless nights, sad moments, crushing experiences etc.  He would accept all these crises in patience and silence. Once just before his retirement I visited him; he asked me: “ when I retire will you take me to the capuchin friary”. When I assured him that I would take him to which ever capuchin friary he liked, he was immensely happy and rejoicing. When religious bishops retire they are free to go back  to the religious houses. This is also a capuchin tradition.

5. St Francis admonished his brothers to preach always, but if need be use words. Peter’s life was attuned to the advice of Francis.

In my struggles, in number of events, in number of places, with number of people, I could share with Peter; he would listen to me without interruption, he would fully grasp my worries, and I could listen to his unspoken words, unuttered sermons, may be one kind look, a pat on the shoulders, one more cup of black coffee,  a little stroll in the garden….

He used to preach but without words…He had never given me an advice… Here he was a true Franciscan……Peter was not known as a preacher as we have the charismatic ones, the over spoken ones,…but he would communicate through his welcoming look, smile, gestures etc….It could be said that his style  was his substance …and the presence of the messenger is the message ….one could learn that little spoken is well spoken….the listener should never feel that the speaker  has over spoken…an extra word is out of place …and what is out of place is dirty….if your words are fine the listener would manifest it in her/his eyes….ultimately what matters is love, acceptance, tolerance, openness, mercy, forgiveness, goodness, joy……and these have no substitutes!

6.One could see in Peter a sense of giving more importance to being than doing. He had developed a personality of being serene, peaceful, than to be hectic, workaholic and taskaholic. Being authentic to oneself and also being  truthful to others marked the main aspect of his personality. Hence there would be more of ease, and allowing events to take its own rhythm. Even in the field of evangelization there is no hurrying up with things or taking short cuts or rapid actions. What concerns  the humans have a rhythm, a natural flow, a sort of being in line and flow of culture. What concerns humans, history, is a slow and steady process. Just as growth in nature is a slow and steady  process. Here one has to be keenly aware of how history in formed. This demands  a sensitive awareness of the human  reality with its ethos and sensibilities. This expects from the leaders great amount of understanding, delicate following up, occasional guidance etc.as we shape a garden with trees and herbs. It is said that, in the case of planting of trees one should have thought of it 20 years ago, there is no short cut, there is no fast food and quick heals. We see on the road side of the Jalandhar city huge palm trees transplanted from else where with the help of JCB and bulldozers. Of  course the task is done over night; but how many trees are getting dried up year by year. One can also see huge olive trees transplanted near the church of St Padre Pio in Italy. The trees remain unhealthy and gradually dry up. In task oriented approach persons and their interests have to  be sacrificed.  Bp. Peter did not give much importance for any kind of major plans for building up institutions like churches, schools, estates etc. As history proves in any fast building up process we lose touch with persons, and end up not in the community of faithful but in concrete forests. In this latter case one can be  vey much materialistic and end up there. But in the former case  importance is given to people and their rhythm of being and  growing up. Of course this is contrast of task oriented approach and person oriented approach; one of being rather than doing.