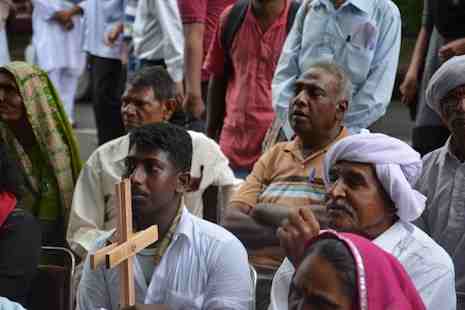 (Note: Dalits are at the receiving end not only in the Catholic Church but all over India, especially in political circles, now in UP and Bihar where the Dalit Leader Mayavathi is making a lot of hue and cry. After reading CCV report about the treatment given to a Dalit Bishop in Kadappa, our friend Arul Louis in New York sent us this report and more to help our readers understand the enormity of the problem and the sufferings of Dalits. The ones whom this issue should torment most are the Episcopal-priestly class in the Church who preach the words of Jesus:”When you have done this to the LITTLE ONES among you, you have done it to me.” The question is whether the high-priestly class in  the Catholic church are followers  in the foot steps of Jesus or just  preachers of his word “for

profit” to feather one’s pocket. In the present case listening and following them would be like  listening to the highly hypocritical high priestly class of Jesus’ time and bearing counter witness to Jesus. Which means that those who desert such church institutions to follow Jesus in world and deed, should be praised, not blamed. james kottoor,Editor)

DINDIGUL: Around 80 percent of Dalit Christians suffer from caste discrimination in the Church especially in some Dioceses with a group of persons enjoying foreign funds, according to Christopher of Dalit Viduthalai Iyakkam (Dalit Liberation Movement).

Deposing before the TN Minority commission, which held a review meeting here on Tuesday, he alleged that people belonging to the minority communities are being denied their rights.Drawing the attention of the panel to the closure of the Kuralampatti church by the Tahsildar, Fr Ramesh sought adequate security for the minority community. Responding, Murugesan, Tahsildar, Dindigul West, said permission would be given for holding prayer service in the church if it did not disturb locals.

Besides complaints against minority-run schools denying admissions to students belonging to those communities, there were also demands for community certificate to those who had converted to Buddhism. Some aided schools were accused of not providing 18 percent reservation for Dalits and STs.

Commission chairman Bishop Rev Prakash computerised community certificates for Buddhism could not be given at present and steps would be taken to give hand-written community certificates.He said people could approach the district minority welfare office and avail the benefits given by the government.

Giving statistics, he said `2.14 crore scholarship was given to minority students in 2014-2015. Financial assistance of `6.08 lakh was offered to 15 members of Muslim Mahalir Uthavum Sangam.While 480 people were given identity cards by the Ulema and Employees Welfare Board, free cycles were distributed to 352 Ulemas besides spectacle assistance of `18,000 to a few.Moreover, 20 beneficiaries have availed marriage assistance and `1.545 croe worth loan was extended to a total of 310 people.