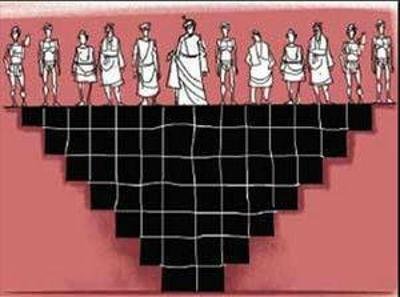 India's present diverse population arose from five types of ancient populations that freely mixed and interbred for thousands of years before the rigid caste system, with its principle of prohibition of marriage outside the caste, put an end to this mixing. This ancient history hinted at in various linguistic, archeological and genetic studies has been confirmed by a path-breaking genetic study recently published.
Researchers from the National Institute of Biomedical Genomics (NIBMG) at Kalyani, West Bengal, analysed DNA samples of 367 unrelated Indians belonging to 20 population groups. These covered castes from different parts of India, and most large tribal populations from central and Northeastern India. Also included were samples from two Andaman & Nicobar tribes.
"Genetic analysis shows mainland India's present population is a result of the intermixing of four main types of ancestral populations – North Indian, South Indian, Austro Asian and Tibeto-Burman," said Partha Majumder, director of NIBMG who led the study. The Andaman & Nicobar tribals have a completely different fifth ancestral origin that originated in Pacific Ocean populations. The study compared genetic sequences from Indian samples with those from Central Asia, West Asia, China and adjacent regions to trace how humans first arrived in India.
What the study also unearthed was the deep imprint of a significant social cultural process in Indian society . It found that interbreeding between communities `abruptly' ended around 70 generations ago, which translates to about 1,575 years ago, sometime in the 6th century .
"To understand this, we looked at the history of the time. It coincided with the period when the Gupta Empire ruled India," Majumder told TOI. This period had seen the consolidation and supremacy of the caste system, entrenched through the sanction of scriptures as well as enforcing mechanisms of the rulers.
"The genetic revelations corroborate India's history.The genetic mixing was contained by the prescription of a social construct," says Majumder.
David Reich of the Harvard Medical School, known for his extensive genetic analysis from samples of two main ancestral populations of India – North Indians and South Indians told TOI that the new study goes beyond his work by including smaller populations of Autro-Asians, Tibeto-Burmans and Andamanese and Nicobarese.
He cautioned, however, that Majumder and his team's calculation could have erred as they used certain statistical methods software, and also considered 22.5 years as the span of one generation. "Standard citation in genetics literature is 29 years based on studies in many diverse societies around the world. We usually use 29 years and that would give substantially older calendar dates than the authors cite," he told TOI.ntial Life Insurance
Majumder explains his data saying these are estimates. There is scope for correction. "The caste system originated in Vedic times, perhaps 1500 BCE or earlier. It must have slowly spread and got entrenched over centuries. Its impact on genetic material becomes evident around 1600 years ago," he explained.
The new study also found some strange goings on even within the rigidity of endogamy . Ancient North Indian males appeared to continue interbreeding with other population groups but the converse process was not happening, probably due to "elite dominance and patriarchy" the study says.
Genetic analysis also revealed that in many parts interbreeding across caste rigidities continued for some time, as in Bengal and Maharashtra. The establishment of endogamy among tribal populations was less uniform.
The study called "Genomic reconstruction of the history of extant populations of India reveals five distinct ancestral components and a complex structure" has been authored by Analabha Basua, Neeta Sarkar-Roy, and Partha P. Majumder.