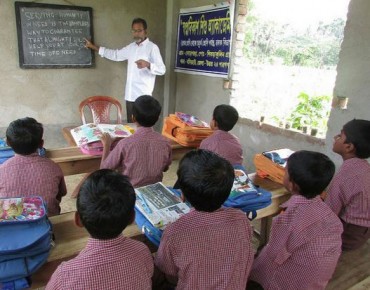 Kolkata (Matters India) : He travels more than 150 kms a day to earn 2,000 rupees per month, working in a social organization. He has almost hit the age of retirement. But for the 58-year-old Abdar Rahman, all this is worth it.

The journey and the meagre earnings may break the back of even young people, but for Rahman, all this effort is worth it: it helps him run an orphanage for Muslim children free of cost in his village. His dream? A simple one at that: to use the money for the education of the orphaned children. No wonder that villagers call him Yatim Baba (father of Orphans) for his sacrifice to the orphanage.

Rahman lives in a remote village of Korapara in North 24 Parganas district of West Bengal. Over years, having been a witness to how many children drop out from school, and being a farmer’s son, he realized his helplessness. Hence, the idea of starting an orphanage called Sevashray’ where at least 10 children from different districts of the state stay and study in a school called `Swapno Bikash Shishu Academy’ which is established inside the orphanage.

Rahman inherited a small piece of land from his father Wazed Ali for cultivation and maintaining the family. However, Rahman sold some of it and bought valuable land on the Haroa-Bashirhat road to make a orphanage. Now, within 40 decimal of land, he started the trust Brati Social Welfare Organisation to run the orphanage and the school.

“My intention was to help the needy villagers on any possible occasion. When I was studying in Malatipur High School, I took patients from the village to Kolkata for medical treatment, often paying for the expenses from my pocket,” says Rahman. Although he dropped out of education during his pre-university days, his zeal to promote education has never faltered.

The next step for Rahman is to expand the orphanage, so that they can accommodate at least 100 people. He bears the entire cost and would like to do more, but due to financial weakness he could not effort more students..

Not only Rahman, his higher-secondary educated wife Manwara Begum, working in a Sishu Sikhsha Kendra under the Sarva Siksha Abhiyan program, also spends time and money in the orphanage. In the orphanage, Rahman recruited three teachers who are handicapped and are post graduates. He said the orphanage school now teaches up to the fourth standard.

Rahman also said parent-less children often end up being separated from the mainstream of our society. He hopes that through his orphanage, the children build proper character through childhood and achieve modern education.

Rahman, who works at GD charitable Society in their scholarship department for the poor Muslim students, said working here helped him make some contacts and get inspired by eminent Muslims. He plans to teach spoken English and convert the orphanage school to an English Medium school. Since he lost his agricultural land in the process of building the orphanage, he is now hoping that other members of the community too come forward to help the orphans.
(This appeared in Two Circles.net on October 30, 2015)