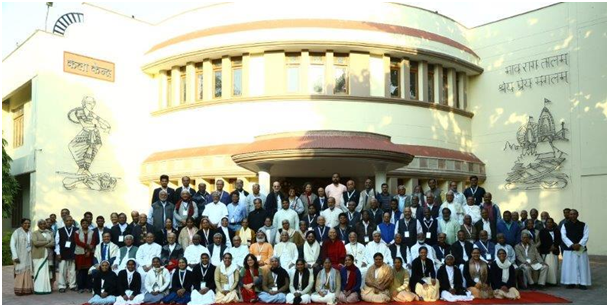 Note: The main reason for publishing this report is the earnest request at the end of  the report: “Have Something to Say? Comment on Facebook.’’ Readers on the face book may not succeed to connect it with this report. So the comment is given here itself.

A report on the national seminar on the 50th anniversary of the historic, unforgettable  CHURCH IN INDIA SEMINAR of 1969 in Bangalore, was anything but most approiatae. It was led by the then Church dignitaries like Cardinals Valarian Gracious of Bombay,  Joseph Parecattil of Ernakuam etc. I too was one of the participants as editor of the then New Leader. Congrats for reporting it in minute detail.

The  “Bete Noire” (blackest spot) in the report as we see it is the proud, honorific, solemn statement: “Cardinal George Alencherry opened the seminar with a solemn Mass on March 2.”

A tainted Cardinal still undergoing a civil court case in land sale scandal in Ernakulam, allowed to  inauguarate? You poisoned the whole programme at its very  fountain head, it appears to us.  Cardinal Alancherry is my close friend, my younger brother by some ten years. So this comment is not against him but against the organizers of the Seminar in Varnasi.

This is clear proof that the Church in India is still deeply rooted in the Church of Constantine. That being the case it can never, never — that is, being in the Bark of Constantine and bound by the imperial honorific rubrics of saluting first the top office bearer with proper appellation —  the present meet just over in Varnasi can never, never succeed to get rooted in Jesus.

The Jesus you seek of is not among any of the highly placed eminences and excellencis in the hierarchicl ladder reaching up to heaven. He is lost in the classless Cattle Class busy serving and finding joy in doing the dirty slavish duty of washing the feet, not of masters but servants. So just forget about getting rooted in Jesus.

Just two more instances: 1. The marathorn fight going on against the monster of ‘Clerical sex abuse’; 2. “Lex orandi is lex Vivendi” (We live the way we pray).

The on-going declared war by the Pope against `Clergy Sex' in low and high echelon of the Church Hierarchy is not going to go away anywhere as long as an hirerarchical church of Constantine is maintained, protected and promoted as a reinforced concrete. Jesus never made it. There was no such structure in Jesus Community.

Away with all Inequalities

This concrete structure has no place in the community of Jesus clearly defined specially in Mt.23,8-13 (also in the whole chapter) which defines both the gender equality and social equality in the  Jesus community. It is the Constantanian Church  alone that fosters and cultivates a comfortable class of perks and previleges and honorific titles. Here we have to feel sorry for “poor Francis Papa”. He may call himself a “Sinner” a thousand times and live in a two-room at  St.Marta, but no  priest, bishop or cardinal is going to imitate him.

We live the way we pray or vice versa (Lex orandi, lex Vivendi). Listening to the  official prayer for the faithful in a Syromalabar Mass is always the most torturing experience and prayer for me. It is divided into three parts: First for the highly placed in the hierarchy, second for honorable group and third for the suffering lot not thought of by any.

So they start: Let us pray for “Cardinal Alancherry” and name other bishops all co-accused in  land-sale financial scandal; then  they name all other worthies recognized in the church hierarchy, and finally they dump together the forgotten miserable suffering lot whom  no one thinks of or prays for.

Who are the first ones, we as deciples of Jesus, should be praying for? Are they not the most in need — materially, physically, socially, spiritually? The ones who wanted to come to the church to pray but could not? Or those whom we publicly acknowledge and acclaim as Holy Reverends, but holy sinners only? “Lord Jesus I did not come to church to join in this prayer, to listen to it or promote it,” I tell Jesus as I hear the priest parrot this prayer. There are any number of other examples of hypocritical prayer.

You are what you think! said  a German Pilosopher. Yes we act only according to our convictions supported by the light of reason. As long as our thinking does not change our praying and living will never change. So the most impotant thing to have the thinking and concerns of Jesus in our hearts and minds, not of the vision of a  triumphant church and of the benefits of a “prosperity gospel,” Constantine preaches, not Jesus.  To know more about  the impossibility of banishing sexual abuse – homosexuality and Clercalism —  from a Constantanian Church  of the comfortable class, read once again the interview report of Bishop Schneider published in CCV, March 9th. In that long  interview Pope admits sex-summit was a failure and explains how it is impossible to wipe out sex abuse from a Constantanian church of comfortable class. Read it again and try to prove it and me wrong.  james  kottoor  editor CCV.

Please read below the report in Matters India on Natioal Seminar.

Varanasi: March 9, 2019:Christians in India should stop “doing activities” and accompany the excluded and broken people in their struggle for a dignified life.

For this, they have to discard a culture of rhetoric and reestablish their rootedness in Jesus and make a lasting commitment to foster integration and communion of people of all faiths, cultures and ethnicities.

This was the consensus of a national seminar that marked the 50th year of the All India Seminar 1969 in Bangalore, considered a watershed in the history of Catholic Church in India.

As many as 125 delegates – laity, religious, clergy and bishops — representing India’s three Ritual Churches attended the March 2-4 seminar held at Nav Sadhana in Varanasi, a regional pastoral center.It was organized by the Commission for Proclamation of Conference of Catholic Bishops of India (national body of Latin rite bishops) in collaboration with Varanasi diocese.

The seminar on “Moving Towards an Authentic Witness to Jesus in India Today” critically assessed the Indian Church’s life and mission since 1969 and looked into future challenges in a society that has changed drastically in the past 50 years.The participants resolved to work together in a spirit of love, respect, justice, equality and mutuality.

Speakers noted a tremendous good accomplished within and through the Church in India during the past 50 years. The Church has moved from expansion mode to spreading the Gospel values in the world.

It is now involved in several new forms and avenues in mission such as inculturation, dialogue, initiatives for justice and peace, social and development works, cooperatives, medicare, environmental action and a presence among the excluded including those in prison.At the same time, the participant noted the absence of a conscientious and unified effort to implement the 1969 seminar resolutions in letter and spirit.

This Varanasi seminar invited the Church to revisit the decisions and the directions given fifty years ago. An authentic witness to Jesus in India today is possible only when the Church personnel situate themselves in the brokenness of the people, the seminar asserted.

The Constitution of India is in danger, as the core values enshrined in it are systematically being eroded.These are major challenges to the Church too, the seminar said.The seminar found hope in Pope Francis’ call to Christians to get out of their comfort zones, and go to the peripheries of society and empower the laity, especially women and youth, and thus gain the “smell of the sheep.”

The particiapnts resolved to accompany the excluded: particularly the Dalits, tribals/Adivasis, migrants, unorganized sector, displaced, and to engage in dialogue with other faiths, beliefs,ideologies and churches.

Becoming aware of the interconnectedness of all in the Universe, the seminar called for sustaining Mother Earth with greater reverence.The seminar also resolved to make the Church more communicating by involving proactively in media.Other resolutions included:

• Have a more participative and truly inculturated Church through basic Christian/human and Khrist bhakta communities, a Church which treats women and men equally


• Ensure compassion and peace and move towards the ‘priesthood of people’


• Promote and propagate the Constitution of India, particularly the Preamble

The three-day seminar arranged 29 papers from theologians, missiologists and ecclesiologists, and 22 sessions that helped the participants share their thoughts and expectations for a New Way of Being the Church in India.

Cardinal George Alencherry opened the seminar with a solemn Mass on March 2.

The participants listened to Ram Puniyani, a leading activist, explaining the increasing hold of religious fundamentalism in India.

At a panel on ‘Sharing by Co- Pilgrims,’ representatives from Buddhist, Hindu, Muslim and Sikh faiths shared their experiences and expectations from the Christian community on Inter religious collaboration.

Archbishop Albert D’Souza of Agra commissioned the participants by anointing them with holy oil. He asked them to become more authentic witnesses to Jesus in India today by living the ‘Joy of the Gospel’ and by assuming the ownership of Responsibility, Accountability, Transparency.