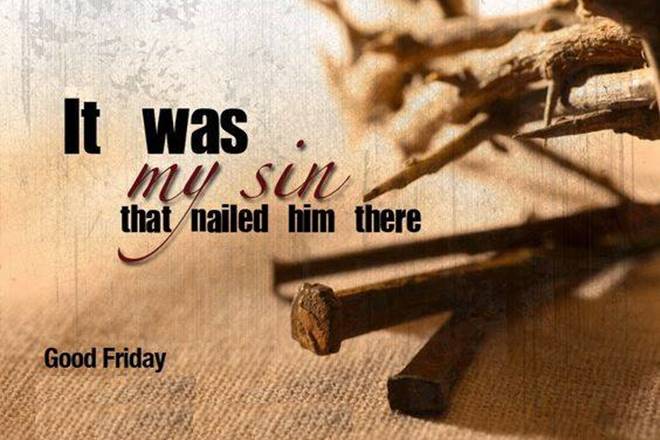 It’s that time of the year  when well meaning people ask us what is good about Good Friday, if it commemorates the death of a great person like Jesus. It is also when people will call up their Christian friends to wish them a Happy Good Friday. Good Friday, for those who don’t know, is probably another festival like Christmas, Diwali or Eid, and therefore warrants a festive celebration.

On the other hand there are pious Christians who commemorate Good Friday by reflecting purely on the physical torment of Jesus. Some dear pastors will show their congregations the Mel Gibson movie “The Passion of Christ”. Among the Catholics, a pious devotion “The Stations of the Cross” recreates the various stages of Jesus’ crucifixion and death, the commentary again focussing on the physical aspects of Jesus’ suffering. Many non-Christians would wonder what was so unique about Jesus’ passion and death. It was after all just a matter of 3 nails that kept Jesus on the cross for 3 hours, and then he rose again after 3 days. What was so special about those 3 hours of suffering? Terminally ill people suffer for years, without relief, something that the Supreme Court of India has recently taken cognizance of. There are also millions of people in the course of human history that have suffered torture and persecution for various reasons.

Interestingly, when the women of Jerusalem were lamenting over his pain, this is what Jesus said to them, “Daughters of Jerusalem, do not weep for me, weep rather for yourselves and for your children” (Lk 23:38). Jesus had sensed that these pious women were moved more by human emotions, rather than understanding the deeper mysteries that were about to unfold. This Good Friday we need to go beyond the merely physical to understand the deeper meaning of what Jesus was going through.

Firstly, it was voluntary. It was a conscious act. He could have avoided it if he chose to. “Let this cup pass over me”. If I am thirsty and there is no water in sight, I have to bear with it. If, however, there is a glass of cool Roohafza within reach and I say no, then the torture becomes unbearable.

The second aspect of Jesus’ suffering was the high stakes involved. If Dinesh Kartik was practising in the nets he wouldn’t have been unduly perturbed about how he played. However, when he had to score 5 runs of the last ball in the recently concluded tri-series in Sri Lanka, he knew that the stakes were really high, with the hopes of millions of fans resting on his shoulders. Christians believe in Jesus’ salvific suffering and its redemptive value, for the sins of all mankind. So imagine the stakes involved and what was going through Jesus’ mind at that time. He had to go through with it to the very end of human endurance. It was only when he got the final signal from the Father that “Jesus knew that everything had now been completed” (Jn 19:28) and he made his total surrender “It is fulfilled” (Jn 19:30). Jesus’ submission, obedience and annihilation were total.

The third aspect of Jesus’ suffering is that he was innocent. What was happening to him was grossly unjust. That is why one of the thieves crucified with him said that they had got what they deserved, but “This man has done nothing wrong” (Lk 23:41). There are many other facets to Jesus’ suffering, like the denial by Peter, the betrayal by the people who just 5 days earlier had welcomed him into Jerusalem with palm branches saying “Hosanna to the son of David”. It would take reams to explain.

I will instead touch on two of his seven utterances from the cross. For me the greatest statement, that reverberates over time is “Father, forgive them, they do not know what they are doing” (Lk 23:34). It is easy to preach forgiveness, but not to practise it, especially in adversity. This is what Gladys Staines had learned from Jesus, and what she spontaneously expressed at the gruesome murder of her beloved husband and two little children.

The second is his concern for his widowed mother Mary.  Seeing her at the foot of the cross he commends her to the care of one of his twelve apostles – John. To him he says “This is your mother” (Jn 19:27). In today’s selfish career driven world, where both children and the elderly are abandoned, Jesus teaches us a lesson to care for the widows and elders.

So Good Friday is not about 3 nails or 3 hours of suffering. The Resurrection on the third day is the ultimate symbol of hope and victory over death, suffering and injustice. It settles all scores. That being so, it is perfectly in order to call this day not just a good Friday, but indeed the Best Friday!

* The writer is the former National President of the All India Catholic Union.