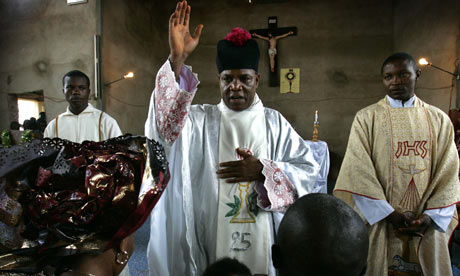 Are priests too consumed with their own power, prestige and importance?

Some are. That’s for sure. My favourites are the ones who put on a front of being consultative while ruling with an iron fist—or the ones who come across all humble and holy while they’re really just showing off.

I know, I know—I should look in the mirror. It is difficult not to fall into the ego trap. May God spare us!

But it is an interesting thing to consider because when this happens, it is not always the priest’s fault completely.

When priests get too high and mighty, vain or autocratic, aren’t the lay people often complicit?

Why is there no criticism of the often-infantile relationship between the laity and their priests? Too often the laity fall into two extremes in their relationship with the clergy—both of them immature.

On the one hand is the fawning, “Ohhh Fawther!” type of groveling before the priest. The lay person puts the priest on a false pedestal and honours him too much—never criticizing and never questioning. They collude with the clericalist priest and together they create a false god out of the priest. The fact that we call our priests “Father” doesn’t help. While I value the tradition, I also see that it subconsciously tends to put the laity into a subjugated set of people with immature relationships. Rather than an adult-to-adult relationship with the priest, we get a child-to-adult relationship. It’s not healthy and it contributes to the tendency toward clericalism in the clergy.

The other reaction among the laity is another form of immaturity that reminds me of seventh-grade girls. When the clergy comes around, the laity are all smiles and courtesy—then when his back is turned they start up the gossip, the griping and the complaining. They never have the guts or maturity to actually come and talk with the priest. They don’t have the guts to speak to him adult-to-adult and express their views and criticisms. Instead, like little middle-school girls nattering about how nasty their parents and teachers are, they get together in a little gossipy huddle and snipe and grumble and complain. This second response also contributes to clericalism because the laity perpetrate the idea that the priest is the great father figure–the authority figure who is there mostly to rebel against in the most petty and immature way.

These responses feed the fire of clericalism because it isolates the priest, reinforces his absolute authority (because the laity don’t have the guts to interact with that authority in a mature and cooperative way) and leads to division and strife in the Church.

This is why I am in favour of active and involved parish committees–where the clergy and laity can get together to listen to one another and work together as a team and as the body of Christ for the furtherance of the gospel. This leads to my further grumble about the laity.

Too many of them don’t want to be involved in helping to run the parish. They want to sit back and let Father do everything. Join the finance committee? No thanks. Join the parish council? Too busy. Join the choir? Not me. Volunteer and get involved? Not my cup of tea. Consequently Father does end up doing everything and takes charge, and thus the lukewarmness and complacency of the people contributes to the problem of clericalism.