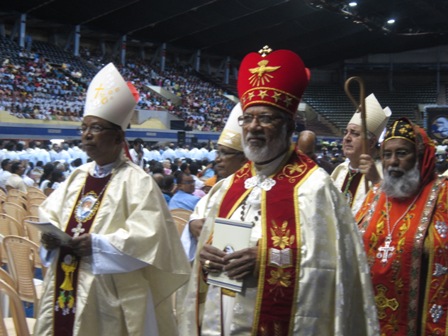 (CCV's Isaac Gomes reports from Kolkata on the Thanksgiving Mass held at Netaji Indoor Stadium Kolkata, followed by a Civic Function to commemorate the Sainthood of Mother Teresa of Calcutta. The cover photo shows Cardinals Telesphore Toppo, Baselios Cleemis and George Allencherry, Archbishop Thomas D'Souza-Archbishop of Calcutta Archdiocese and Apostolic Nuncio Salvatore Pennachhio, flanked by 10,000+ audience inside the stadium, walking to the altar for the Thanksgiving Holy Eucharist). 19 years ago, in September 1997, it was here that a packed stadium participated in a Eucharist to bid a tearful farewell to Mother Teresa "Saint of the Gutters".  Today, 19 years later, the same venue was chosen to hold another Eucharist – this time to express gratitude to the Almighty for the Canonisation of Mother Teresa. On 4th September 2016, at the Vatican Rome, Pope Francis declared the Mother “Saint Teresa of Calcutta “. What an auspicious day to choose to thank the Lord. For today, is the birthday of Mahatma Gandhi, who was a contemporary o f Mother Teresa and was hailed by the world as a Messenger of Peace for his non-violent methods to secure India's independence from the British. It is of course a matter of great debate  whether only non-violence without the strong push of the Azad Hind Army of Netaji Subhas Chandra Bose, would have succeeded in getting us our freedom. Both Gandhiji and Mother Teresa are today revered all over the world as Icons of Peace. Both are Indians – one  by birth, the other by naturalisation and choice of conviction – the conviction to serve the poor, needy and the downtrodden of India, for which she got the Nobel Prize and the Bharat Ratna.

It was a very solemn and yet very moving Eucharist where the Nuncio Salvatore Pennacchio was the Main Celebrant along with 3 Cardinals (Cardinals Telesphore Toppo, Baselios Cleemis and George Allencherry), 49 Archbishops and Bishops and a countless posse of priests. The Eucharist began with a lively welcome dance. The 10000 plus audience got fully involved, led by the precise and crisp introduction by Archbishop Thomas D’Souza, Archbishop of Calcutta and a very deep homily by the Nuncio . The well-trained choir brought the Holy Eucharist alive. The Choirmasters Derek Fernandes (English), Dilip Ros ario and Peter Gomes (Bengali & Hindi) must be complimented for their painstaking efforts.

After the Mass was over at 5 pm,  there was a short 15-minute break.  At 5.15 pm the National Anthem was sung and the audience stood up to welcome the Vice President Mr Hamid Ansari who was the Chief Guest, his wife and the Guest of Honour, Mr K.N. Tripathi, the Governor of West Bengal. They were felicitated with gifts by the Archbishop and Sr Prema Superior General of Missionaries of Charity. Then, TMC Rajyasabha MP Mr Derek O'Brien said that Sr  Prema, the Superior General of the Missionaries of Charity and her sisters are wonderful people. He said the MC sisters lead a spartan life with hardly any entertainment. But of late, for the past few days, they were enjoying 90-minutes of film shows every day – films on the life of Mother Teresa! He also fished out another anecdote.  It was that the Nuncio could make very tasty coffee and that he had got a statue of Mother Teresa installed in his Delhi garden two years before Mother was declared a saint and Kolkata got her statue installed only on 26th August this year, on the 107th Birthday of Mother Teresa (26th August also happens to be the birthday of Archbishop Thomas D'Souza). He also emphatically said that the Mother truly converts. She converted a Muslim to be a better Muslim, a Hindu to be a better Hindu, a Sikh to be a better Sikh and a Christian to be a better Christian. Keeping in mind his priorities in politics, Mr Derek promised he would try to be one per cent like Mother Teresa! It is elementary Watson!! After this the Vice President Mr Hamid Ansari gave a very eloquent and spirited speech. He said when Mr Derek invited him to be the Chief Guest at today's civic function, he readily accepted.  He said there was no way he could refuse to attend a function to honour "St Teresa of Calcutta", especially when such a function takes place once in a generation. He described Mother Teresa as a Talisman of Compassion, love and care. Her love for the needy, the sick and the downtrodden was boundless, cutting across caste, creed and religious divide. He recalled what the Mother said "What the poor need most is to feel needed, to feel loved. There are remedies and treatments for all kinds of illnesses, but when someone is undesirable, if there are no serving hands and loving hearts, there is no hope for a true cure". She was God’s light, compassion for all, a messiah of the poor and called herself "a pencil in the hand of God" which has made it possibe for her from a humble start of 12 nuns, to multiply into 5500 nuns and volunteers spread over 139 countries. Mother's sense of humanity displayed with utmost humility is what truly exemplifies her for Indians. Sister Prema thanked Kolkatans for their wonderful spirit. She recollected that 19 years ago, the same Netaji Indoor Stadium was filled to capacity to take part in the Holy Eucharist held to bid a tearful farewell to Mother Teresa. And today the crowd had gathered to enjoy and give thanks to the Lord for crowning Mother Teresa with sainthood. She said Mother's love for the destitute reminds us of the unconditional love of God for us. She thanked the Vice President, the Governor and all the dignitaries, in particular Chief Minister Ms Mamata Banerjee and her Government for the excellent support given to make all the events of the Canonisation Programme a success. She had special words of thanks for Archbishop Thomas D'Souza and his team of Canonisation Celebration Core Committee.  In the end, she said: "Indeed we have much to thank God for."

The other speakers were Cardinal Baselios Cleemis and Mr Navin Chawla, ex-Chief El There was a short cultural programme put up by girls from St Xavier’s College and girls from Mother Teresa’s centre. Calcutta Youth Choir also put up a couple of Bengali songs.

The programme ended with a vote of thanks by Mr Alexander Anthony, Secretary of the Organising Committee.

NOTE BY THE REPORTER:

The cultural programme could have been much livelier had, with a judicious blend of Hindi, English and Chinese songs / music and dance, due weightage been given to the multi-cultural reality of Kolkata. The Chinese congregation who are devout Catholics and great devotees of Mother Teresa, would have gladly put up a sterling performance of dragon dance to bring about a totally different ambience to the stadium. The Nuncio and those present would have got a taste of Kolkata's rich blend of heritage. Through  the Nuncio, who is the papal ambassador, this would have carried a message to Mainland China on how Christianity has evolved in Secular India. There is still chance to make amends on the 23rd October 2016 cultural programme at St Xavier's College, including supply of drinking water. At Netaji Indoor the audience were parched for five hours without a drop of drinking water. When Mother Walk took place on 25th September,  St James School authorities had made very good arrangements for providing safe drinking water.