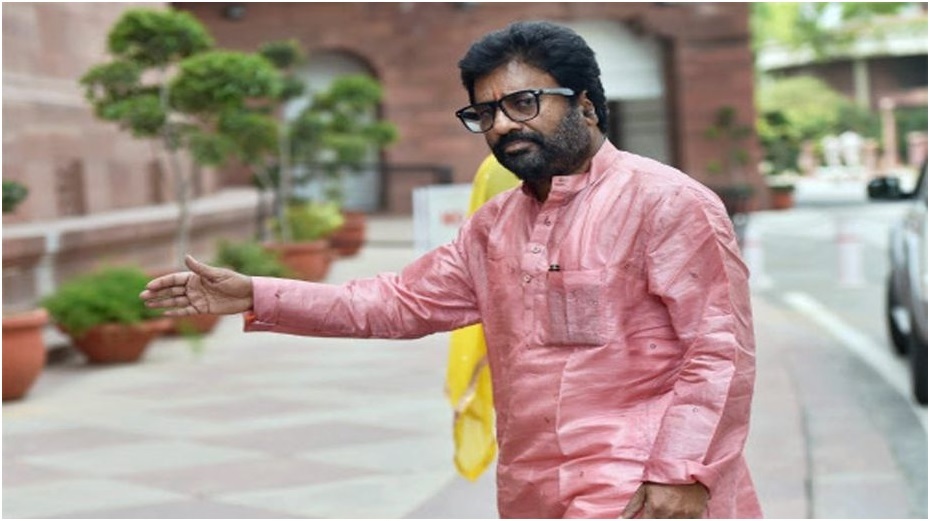 (Note: Can you imagine that a third of our MPs are criminals, including the Shiv Sena MP seen in the picture and no action can be taken against him? What good can come from them for the country? A bad tree can produce only bad fruits. One rotten apple makes the whole basket to get rotten.That is what we see happening in India.

Who is to blame for this sad state of affairs? Both the leadership and the public who vote for them even after knowing them to be criminals. This can be corrected only when the whole mindset of the country changes for honesty and probity in public life. Without that no electoral reform can be thought of and implemented. Till then India will continue to be  the largest democracy in the world ruled by the largest number of criminals. James kottoork, editor)

In the “fair is foul, foul is fair” world of Indian politics, the good does not always prevail over the bad and the ugly. Instead, it is often just the opposite, as can be seen from the relative ease with which a Shiv Sena M.P. has been able to shrug off his assault on an Air India staffer and return to Parliament to serve the people.

He is not the only honourable representative of hoipolloi who faces a criminal charge. There are quite a few others in the august House because unlike other democracies, the Indian version has the dubious distinction of openly harbouring disreputable elements.

When the Lok Sabha Speaker, Sumitra Mahajan, was told about the misconduct of the Shiv Sena MP, she refused to take suo motu cognizance of the incident since it occurred outside the House. Perhaps this technicality explains why no action can be taken against a third of the MPs ~ 186 out of 541 ~ who have a criminal past, according to the Association for Democratic Reforms.

The MLAs, too, do not lag behind, as is evident from the case of Kerala’s power minister, MM Mani, who boasted in a public speech in 2012 that his party ~ the CPI-M ~ had killed many of its opponents. “We made a list of 13 people”, he said, and “one, two, three … we killed the first three of them. One was killed by the bullet, another one was stabbed. The third was beaten to death”.

In next door Tamil Nadu, the person who aspired for the chief minister’s chair after Jayalalitha’s death is now in prison for amassing wealth beyond her known sources of income. Jayalalitha, too, would have suffered the same fate if the Supreme Court had delivered its verdict earlier. In the event, death saved her from the ignominy.

What the track record of these luminaries shows is that politics has become the playground of a sizeable number of unsavoury VIPs. It is not only isolated individuals who have a murky past.

Even entire parties are seen as the home of rowdies. The Shiv Sena, for instance, has had this reputation virtually from the time of inception.

In UP, the Samajwadi Party has long been known as a party of toughies. Now, chief minister Yogi Adityanath’s Hindu Yuva Vahini has taken off from where the Samajwadi Yadavs had left off in the matter of assault and intimidation.

The Congress, too, has faced this charge as when a Marxist theatre personality, Safdar Hashmi, was killed in 1989 in a case which the judge, who sentenced the nine accused to life imprisonment, said “symbolized criminalization of politics”.

At the root of this infiltration of villainous felons into politics is the virtually complete sway which the criminals enjoyed over politics, particularly at the time of elections till the Harvard-educated Chief Election Commissioner, TN Seshan, cleansed the electoral process during his tenure (1990-96). Till then, the phenomenon of the so-called booth-capturing was a disgraceful feature of elections, especially in the Hindi belt, when crooks masquerading as party workers muscled their way into polling booths, chased away the voters and polling officials and cast votes for their favourite candidates.

Electoral malpractices under political patronage are not the only reason for the criminalization of politics. Another is the violence which accompanied political agitations. One of the most well-known historical instances was the burning down of a police station by a mob in Chauri Chaura in U.P. in 1922, killing more than 20 policemen, which made Mahatma Gandhi call off his non-cooperation movement.

There have been innumerable such cases of violence both before and after independence which have enabled rowdy elements to become a part of the political scene.

Allied to their role is the fact that some of these elements rose from being the political musclemen of top political leaders ~ as Gopal “Pantha” Mukherjee was to BC Roy when the latter was the West Bengal chief minister ~ to being politicians themselves. In the latter category can be placed the former Rashtriya Janata Dal MP from Bihar, Mohammed Shahabuddin, who is now in jail.

Notwithstanding the known links between the political class and the underworld, politicians have occasionally tried to address the problem, presumably because of the tainting of their reputation. As is their habit, the answer was to set up a committee to assess the festering malaise in the system.

The committee, headed by a former Union home secretary, NN Vohra, stated, inter alia, that the “various crime syndicate/mafia organizations have developed significant muscle and money power and established linkages with government functionaries, political leaders and others to be able to operate with impunity”.

That little has changed since 1993 when the report was submitted is evident from the increase in the number of M.P. with criminal records from 158 after the 2009 general election to 186 after 2014. Evidently, no serious attempt has been made by the political class to even address the problem, let alone trying to eradicate it.

Their disinterest and even defiance of sober behavioural norms could be seen from the response of a Shiv Sena spokesman to a question on the beating up of the Air India official by his party’s MP that the Shiv Sena was not against the raising of a hand against those it disapproved of.

There is a long way to go, therefore, before politicians arouse respect and admiration in India.

The writer is a former Assistant Editor, The Statesman.