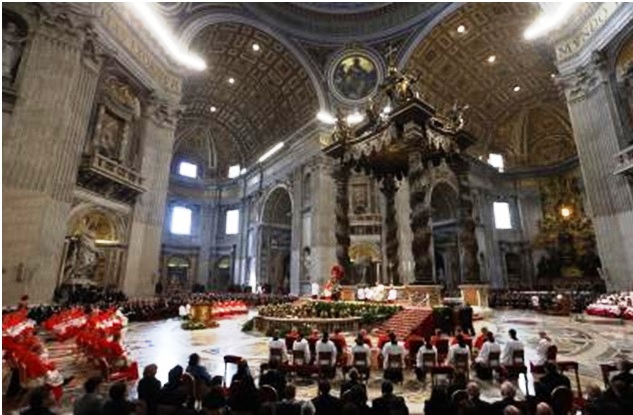 Calls them to combat the polarization, exclusion, animosity and violence in today’s world

In this file photo, Pope Francis leads a consistory at which he created 20 new cardinals in St. Peter's Basilica at the Vatican on Feb. 14. (CNS photo/Paul Haring)

(Note:  Unforgettable are the things Pappa Francis said and did  on the occasion of creating 17  new cardinals,   most from “the peripheries” (central to Pope’s thoughts and words) of world community, that is, from little known or insignifica

nt countries of the world, like Bangladesh, Central African Republic,  Mauritius, Albania, Mexico, Papua New Guinea, Venezuela, Lesotho, Malaysia etc. It was an emphatic demonstration of his all embracing vision to include the excluded and bring in the forgotten, while the world around him is moving in the opposite direction.

Driven by the propelling motor called globalization & fuelled by the energy (petrol & diesel) called internet and instant communication breaking all border barriers, till recently, humanity has been naturally forced to race  towards unity, universality and international cooperation, (not confrontation or conflict) transcending bygone borders of nation states and national citizenships to revel as global citizens as the ultimate goal. It has now pitched its camp under the improvised canopy of UN to ponder on how to proceed to reach a more humane unity, universality and mutual support among all nations.

It is at such a juncture that shattering breakups like Brexit with UK  distancing itself from  Euro zone and now USexit, (the exit of US) the one super power withdrawing like a snail from various existing international cooperative ventures like NATO, Paris Climate Change, etc. under the new Trump presidency  are happening. Some see US elections as a Domino effect caused by Brexit, and both together now foreboding further fissures and breakups in the world community to put Humanity on a reverse gear to go back to barbaric days when confrontation and might was right.

If humanity is now on such a reverse gear, will it take us back to Bush-times or jungle era of brute force, white supremacy and enslavement of the weak and marginalized? It is in this context that Francis describes the names of conflicting forces at war: On the one side are arrayed the forces of hate creating divisions and anger through  hurting and demonizing propaganda against various ethnic, racial, religious, immigrant, marginalized groups finally leading to terrorist attacks and mass murder. On the other side are the forces of good beautifully described by Francis quoting Jesus: “Love your enemies, do good to those who hate you, bless those who curse you, and pray for those who mistreat you.”(Lk.6.27) Pope’s exhortation to the forces of good is to arm themselves with the four hallmarks of the gospel of mercy to fight: 1. Love them 2. Do good to them 3. Bless them  4. Pray for them. This is the advice he gives to the 17 cardinals he created and to all his listeners the world over and reported below.  james kottoor, editor).

Pope Francis created 17 new cardinals from 14 countries and all continents, including three from the United States: Blase Cupich, Kevin Farrell and Joseph Tobin, in a ceremony in St. Peter’s Basilica today. He called them to combat the epidemic of polarization, exclusion, enmity, violence and the pathology of indifference that is spreading like wildfire in the world.

He urged them to do so “with the Gospel of mercy” before giving each one the cardinals their red hat, ring and titular church in Rome. He spoke after the nuncio in Syria, Mario Zanari, thanked him on behalf of all 17 at a festive, colorful ceremony in St. Peter’s Basilica attended by the College of Cardinals and thousands of relatives and friends of 16 of the new cardinals  (the one from Lesotho was absent due to ill-health). There were also official delegations from 12 countries, and a delegation of 80 from Chicago and Illinois. The Imam of Bangui accompanied Central Africa’s first cardinal, Dieudonné Nzapalainga.

As a son of St. Ignatius of Loyola, Francis is ever attentive to “the signs of the times.” He seeks to discern in them what God is calling his church to do at this time in history. He used this important event to share his discernment with the College of Cardinals.

“Ours is an age marked by grave problems and issues on a global scale. We happen to be living at a time in which there arises epidemically in our societies polarization and exclusion as the only way possible to resolve conflicts,” he stated.

“We see, for example, how quickly those among us with the status of a stranger, an immigrant or a refugee, but becomes a threat, and acquires the status of an enemy,” he said, in words that go to the heart of what is happening in the United States and Europe today.

Francis warned that “without us realizing it, this logic instills itself in our way of living, of acting and proceeding. Little by little the differences are transformed into symptoms of hostility, threat, and violence.” This epidemic of “animosity and violence” causes “many wounds” in “the flesh of many that have no voice because their voice is weakened and silenced by this pathology of indifference.”

Pope Francis noted that the church is also being affected because “between us, within our communities, our priests, our meetings” this “virus of polarization and animosity permeates our ways of thinking, feeling and acting.” The church is not immune from this, he said; “we need to be attentive” so “that such an attitude does not occupy our heart, because it would be contrary to the richness and universality of the church, which is tangibly evident in the College of Cardinals.”

In this context, he underlined the multi-ethnic, multi-cultural, multi-lingual nature of the College of Cardinals that today has 228 members from 79 countries and all continents, including 121 electors (those under 80 with the right to vote in a conclave) from 59 countries. The 13 new electors come from Bangladesh, Belgium, Brazil, Central African Republic, Italy, Mauritius, Mexico, Papua New Guinea, Spain, the United States of America and Venezuela, while the 4 non-electors come from Albania, Italy, Lesotho and Malaysia.

“We come from distant lands, we have different customs, skin color, languages, and social backgrounds; we think differently and we also celebrate our faith in a variety of rites. None of this makes us enemies, on the contrary, it is one of our greatest riches,” he said.

He called on the new cardinals to work to overcome this terrible epidemic by adopting the four hallmarks of mercy outlined by Jesus in St. Luke’s Gospel: “love your enemies, do good to those who hate you, bless those who curse you, and pray for those who mistreat you.”

He acknowledged that “these are not actions that come spontaneously in dealing with those we consider our opponents or enemies.” On the contrary “our first instinctive attitude is to dismiss, discredit or curse them, and often we seek to ‘demonize’ them, so as to have a ‘sacred’ justification for dismissing them”, and “we raise walls, we construct barriers, and we classify persons.”

Francis reminded them that Jesus tells us that when it comes to “the enemy, the one who hates you, curses you and defames you,” we are called “to love him, do good to him, bless him, and pray for him.” This is heart of Jesus’ message, he stated. “The enemy is someone we must love,” because “in God’s heart there are no enemies, God has only children,” and “loves them all with a paternal and motherly love,” and “does not abandon” us “even when we go astray.”

He said “the unconditional love of the Father for everyone has been and is a true demand of conversion for our pitiful hearts that tends to judge, divide, oppose and condemn.”

He told the new cardinals that Jesus is calling them to go “into the crossroads of our history to proclaim the Gospel of mercy,” to spend their lives “sustaining our people in hope, as signs of reconciliation” and to open their eyes “to see the wounds of so many brothers and sisters deprived of their dignity, deprived in their dignity” and living “without the strength, light and consolation born of friendship with Jesus Christ, without a community of faith to support them, without meaning and a goal in life.”

After the ceremony, Pope Francis and the new cardinals boarded two minibuses and visited the emeritus pope, Benedict XVI at the Mater Ecclesiae Monastery in the Vatican Gardens where he lives.