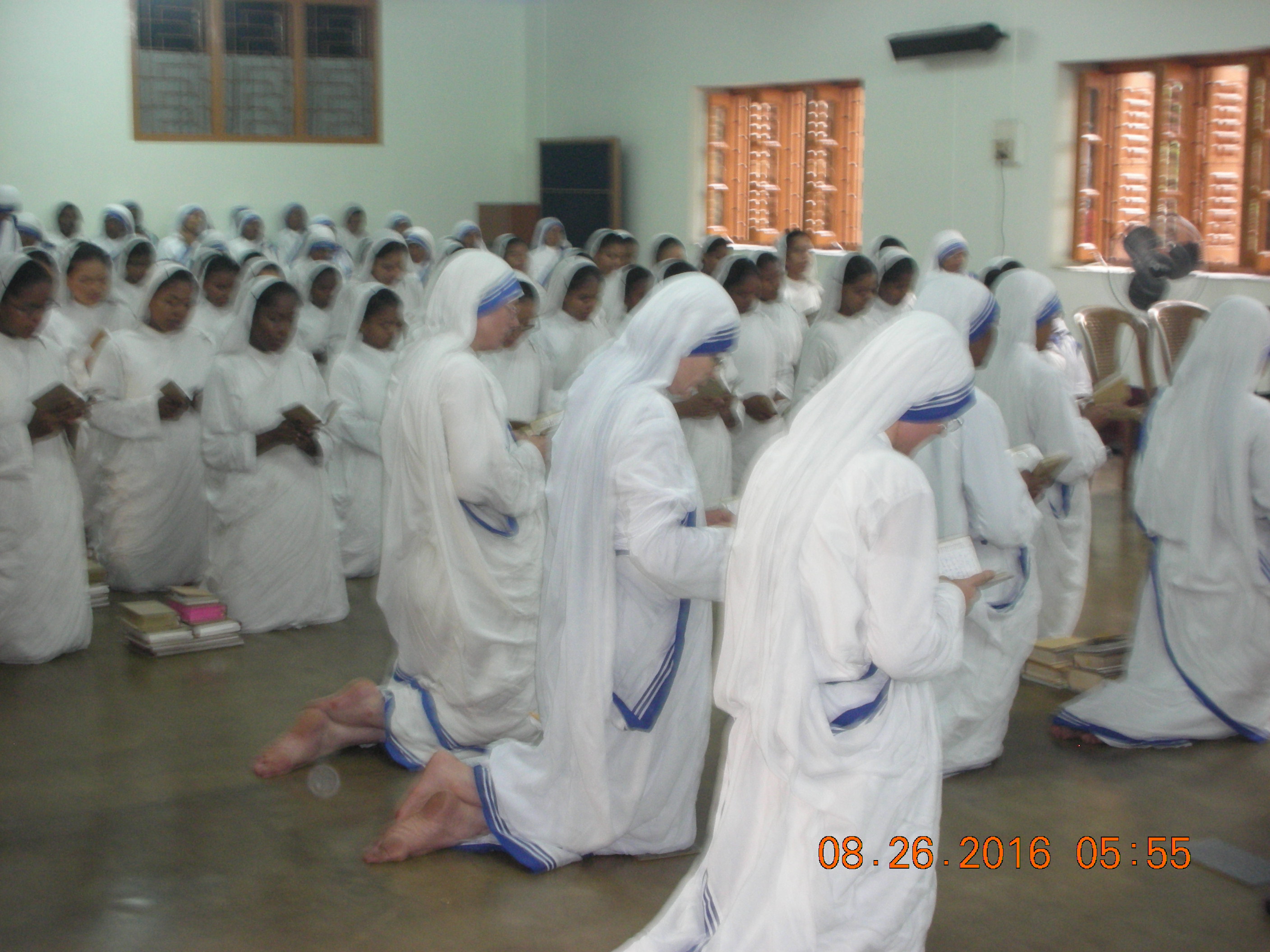 (Note: 26th August 2016 was the birthday of Blessed Mother Teresa of Calcutta.  CCV's Isaac Gomes reports from Kolkata on two events that took place on the occasion of the Birthday).

26th August 2016 Kolkata the City of Joy witnessed two events.  The first took place at 6 am at the Mother House where in the presence of a large contingent of priests and Press Photographers (NDTV's Ms Monideepa Banerjee along with her TV crew was conspicuosly noticeable), a Holy Eucharist was celebrated to commemorate the 107th Birthday of Blessed Mother Teresa of Calcutta.  Readers are aware that the Mother is going to be canonized in Rome on 4th September 2016 as Saint Teresa of Calcutta.  In his homily, the Archbishop said the Mass was offered to remember Blessed Mother Teresa of Calcutta and also to pray for children, especially for Mamta and Shilpi who were going to Italy for adoption.  The Archbishop's homily was on Wisdom and Foolishness based on the Parable of the Wise and Foolish Virgins (Matthew 25:1-13).  He said wisdom consisted not in proclaiming the Gospel of Jesus Christ in lofty words but in telling the world of the power of Jesus crucified.

While talking of Foolishness, he mentione d of Pope Francis’ visit to World War II Concentration Camp in Poland where   the Germans in their smallness of mind put to death more than one million Jews.  That according to him, was foolishness.  He emphasised  that in the background of what happened at the Concentration Camp in Poland, we must thank the Lord for having given us the gift of life and the Mother.  Her life was a mission to proclaim the Good News of Jesus who said “I am the way, the Truth and the Light.”  Through Renunciation, Asceticism and Sacrifice Mother Teresa emulated Jesus on the Cross, and dedicated her life in the service of others. Like the Mother, all of us are called to share our lives for others whether we are priests, religious or people having families.  That is God’s wisdom of life for us. That is why mother chose the name Missionaries of Charity – for love involves charity, sharing and sacrifice.  He mentioned an anecdote of a large gathering where the Mother gave a short speech in Bengali.  There was pin-drop silence and all listened with rapt attention.  One priest whispered “We say the same thing but nobody listens! “ Mother’s life was a message.  In passing, the Archbishop said that it was his birthday too.  What a pleasant coincidence!

The second event was at the Archbishop’s House in the evening, where in a closed ceremony, West Bengal Chief Minister Mamata Banerjee, unveiled a 5 feet 2 inches tall bronze statue of Blessed Mother Teresa, along with Archbishop Thomas D’Souza and sister Lysa, Assistant Superior General of Missionaries of Charity. The statue has been donated by industrialist and philanthropist, Mr Namit Bajoria who i s the Designate Honorary Consul of Republic of Macedonia in Kolkata.  It was a rare event because the statue was erected just beside that of St John Paul II who on 19th October 2003 had declared the Mother “Blessed Mother Teresa of Calcutta” when he was the Pope. What a turn of events for the Mother who destined by God travelled miles from her birth place Macedonia (Skopje) to do her missionary work in the heat and dust of the slums of Motijheel, Kolkata.  Even before being canonized as “St Teresa of Calcutta” on 4th September 2016, to the world she is already famous as the “Saint of the Gutters”.