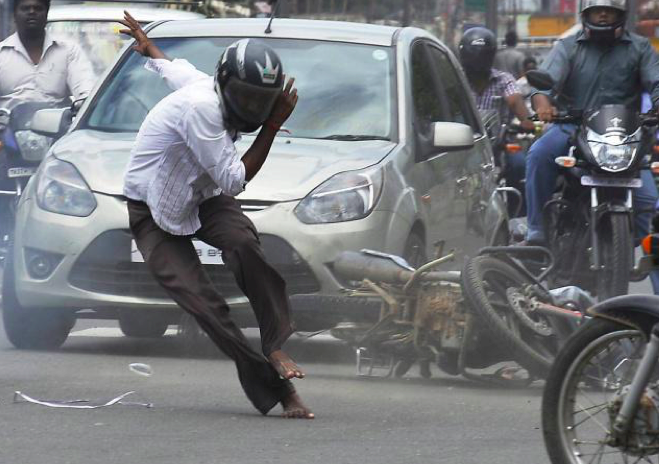 The Hindu: Majority of road accident victims are in the 15-34 age group. File photo: K. Ananthan

(Note: It should open everyone’s eyes when they hear that more people are killed in India in road accidents than in wars, epidemic and militancy, that is, 1.46 lakh people in 2015. Over speed, drunken driving, and carelessness about the rules of the road are the main causes of accidents. Before starting a trip to Palai from Ernakulam,  a driver was asked: “When will we

reach Palai?” He said: “I am not sure if we reach Palai, then how can I say when we will reach.” He was implying that accidents can happen in spite of all the precautions a driver may take. If the main concern of the driver is to reach the destination safe and sound, the chances are, accidents will be reduced to the minimum.  james kottoor, editor)

An official report, released by Union Road Transport and Highways Minister Nitin Gadkari on Thursday, said 1.46 lakh people were killed in road accidents in India in 2015 — an increase of five per cent from 2014.

Also, drivers’ fault was responsible for 77.1 per cent of the accidents, deaths and injuries, mainly because of over-speeding, the report noted.

Alarmed by rising road accidents, the Union Road Transport and Highways Ministry has sent a Cabinet note for setting up a National Road Safety and Traffic Management Board to advise the government on road safety standards and guidelines.

The body is likely to be chaired by a former Road Transport Secretary.Safety body mooted to put brakes on road accidents

The Centre has decided to form the National Road Safety and Traffic Management Board through an executive order after it failed to push the Road Safety Bill owing to the logjam in Parliament, an official of the Union Road Transport and Highways Ministry said.

“The Ministry never had an advisory body of experts to lay down standards and oversee activities related to road safety,” the official said and added that it would be funded by the Ministry.

“We are sending a Cabinet note to form an advisory body, under our Ministry, mandated to advise on rules and regulations, road safety and road engineering,” a senior official of the Ministry said, speaking on condition of anonymity.

According to a senior official of the ministry, the proposed body will have a permanent office and five or six members with expertise in road engineering, road safety, automobile manufacturing, traffic and trauma care. It will also have a joint secretary from the Ministry as its member and will be set up through an executive order after Cabinet’s approval.

“It is not a good sign that around 1.5 lakh people are killed in road accidents every year. So many were not killed even in wars, epidemic and militancy,” Road Transport and Highways Minister Nitin Gadkari said.

Mr. Gadkari said the States would be encouraged to send reports on road accidents and their causes to the Centre every three months.

“Setting up a road safety body through an executive order makes it toothless. The idea to float a Bill was to give powers to the board to set standards, independent of the government, and not give recommendations,” said a member of the S. Sundar Committee on road safety and traffic management, which in 2007 mooted the idea of setting up a Road Safety Board.