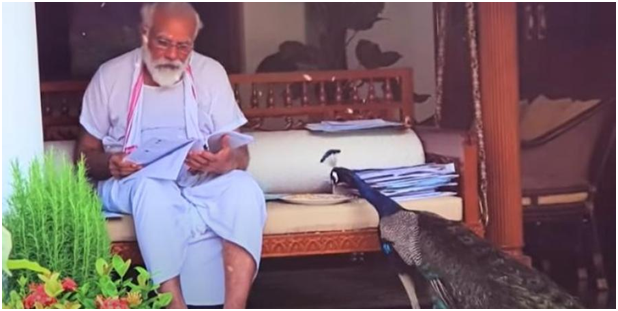 A failed leader is dismissed from public memory if he is lucky, humiliated if he is not. A successful leader has all his failures erased from memory.

Yet another piece from TJS George, noted columnist in New Indian Express. What he highlights here is Modiji’s success to project his own image over his party, nay over all PMs who ruled India. His time in India will be known as “the Modi Period!” says George.

For good or bad Moddili has made his mark in history as no one else has.It is also called “self-projection” or  “Peacocking” to borrow a phrase from Francis Pappa. Francis of course, used it to warn Catholic clergy, priests, who run after power, position, titles like Monsingor, Bishop, Archbishop, Cardinal, finally, the most coveted, to become Pope himself. This group in the Church are called CLIMBERS or ALPINERS!

Of course this is just the opposite of all Christian principles and civilized human behavior. But this happens both in religion and politics. What is the remedy? “Simple living and high thinking!, also demonstrated by Pope in his personal life, known to all of you! On political front we have the example of Gandiji. Such examples in history are hard to find, we have to create them!

Writers like TJS George help us to separate the chaff from the wheat. We, you and I, have to the on go to become creators of history! Let not any of us found wanting to do our role, to become successful leaders, not failed ones! james kottoor, editor ccv.

No prime minister has imprinted himself on Indian history as effectively as Narendra Modi has done. Such has been his dominance that when history comes to be written, his years in power will be known as the Modi Period, not the BJP Period. One reason he will outshine his party is the importance he has always attached to projecting himself as a leader unlike any other.

Self-projection always runs the risk of over-doing. Fortunately for Modi, he has no rival in his party or outside it. This naturally works to his advantage politically. But it also prevents him from realising where to draw the line in terms of public relations. This is a serious handicap as became evident on two occasions recently. The first may be called the Peacock Moment and the other the Laptop Moment.

The Peacock Moment was a photographic triumph. How could it not be when peacocks are around? There they were, strutting about as Modi walked through his garden, spreading their spectacular plumage, dancing and pirouetting, hopping and swaying as if inspired by the Prime Minister’s presence. With the ever-appreciative media circulating the photographs widely, the effect was dramatic.

The Laptop Moment was less spectacular, but the message it conveyed was important. The pictures left nothing unsaid. We could see him sitting under a tree in a verdant garden. Around him were two white ducks, an open laptop, two books in English, both open, suggesting that they were being read simultaneously, and a newspaper being scanned keenly, not any newspaper but a pink one. Our Prime Minister is of course a multi-tasker, but even a BJP child could see that this was a stage-managed photograph, except the ducks who carried conviction as they tried to look disciplined to suit the occasion.

We live in unusual times when everything must fit into the scheme of a successful leader. A failed leader is dismissed from public memory if he is lucky, humiliated if he is not. A successful leader has all his failures erased from memory.

Who remembers that demonetisation was a blunder the consequences of which are still plaguing us? Who recalls the spectacle of 450 million people, rendered jobless overnight, walking from the big cities to their native hinterlands where only misery awaited them? That migration of March-April 2020 will remain etched in the collective memory of India for generations to come.

Some decisions hurt the country so badly but they will be remembered for long even if they are not discussed in public. The most scandalous of these was the decision to scrap the original agreement with France for the purchase of Rafale fighter jets. A new agreement was signed to buy fewer Rafales at three times the original agreed price. India lost heavily for the sake of benefiting a private party who appeared on the scene with no previous experience of aircraft deals. This was one deal where there was not even an attempt to hide the personal interest that superceded the national interest.

All governments do hanky-panky with the national interest. Mahatma Gandhi himself did not try to stop G D Birla from using their personal friendship for business advantage. But earlier governments tried to give the impression that they were not unduly influenced by personal loyalties. They were keen that their actions were seen by the people as fair. It is only now that we see a disregard for public approval of that kind. The Adani-Ambani culture is very different in style from the Birla-Bajaj culture.

That this difference can impact on the foundations of democracy itself must make us pause and look at where we are going. The Modi Government has taken a step to undermine Parliament itself. Taking advantage of the coronavirus scare, it decided to cancel Question Hour in Parliament. This means a Parliament with its front teeth gone. Front teeth have a unique impact. They are important even in a country where Parliament has already lost its molars.

All kinds of symbols and signals are clicking around us all the time. Peacocks and ducks appear up front. Unseen behind are hyenas and jackals. They all convey a single message: almaywas an inspiration for the rest of Asia. The way things are happening now, it is beginning to look like democracy is shrinking and the distance between India and Pakistan is getting reduced. As the pop lyricist said: We are waiting here for something to save us.