​“OWN YOUR HERESY” – Join in this listening-talking on-going Synod 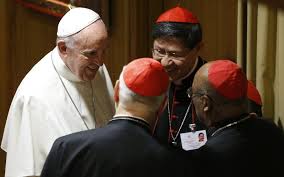 “OWN YOUR HERESY”: THE ARGUMENT OVER WHO GETS TO DO PUBLIC THEOLOGY TAKES A SHARP TURN

(Note: Speak up and dare to make mistakes to get corrected to learn more. That is precisely the purpose we started this portal, CCV. In the words of Pope Francis we all have to listen humbly and speak openly, bravely and honestly in the Synod, in the church, in the family of  man, nuclear and universal. This article below is a shining example of two youngsters, Faggioli and Douthat, conducting a debate or a friendly war of words on religious, theological topics discussed in the Rome synod on Catholic families. I wish readers of CCV take a cue from them and come in with their insights, contributions, doubts, agreements or disagreements on what is published and innumerable questions raised on things they don’t know, but want to know. The best way to learn is the Socratic method of asking questions. Socratic, because it is Socrates who made it popular first. So may we humbly and earnestly  request you all to join in the conversation we are starting afresh.  But on what? “The Synod is dead, long live the Synod,”  Synod is proof of “Francis’s failed Pontificate”, “Clear win for Conservatives” in the  synod, no, “Progressives won”, Synod showed up who are the “anti-reform and pro-reform bishops”, synod showed who are the bishops “to be sacked” “smoked out”, what is over is “synod of Bishops”, what starts now is the “synod of families all over the world”, Francis is “Mr.Hypocrit”, no he is the “true face of God’s Mercy”. What is given in quotes are some of the things widely and hotly discussed in Catholic, Religious and Secular press. So speak your mind on anything closely related to the your family and the family of all humans to make it more humane. james kottoor, editor)

The topic of Ross Douthat’s Erasmus Lecture for First Things magazine this week was “The Crisis of Conservative Catholicism,” a timely one given the recent public tussles over the Synod of the Family in Rome. On the same evening, a group of prominent Catholic theologians released an open letterto the editor of the New York Times, responding to Douthat’s October 17th column on “The Plot to Change Catholicism.” In the letter, the theologians objected to Douthat’s “view of Catholicism as unapologetically subject to a politically partisan narrative that has very little to do with what Catholicism really is.”

Douthat had stirred up trouble on Twitter the previous week when he got into a protracted debate with Catholic theologian Massimo Faggioli, who stated that Douthat’s column demonstrated an “ignorance of basic Catholic theology.” After some back and forth on doctrine, Douthat fired back: “Own your heresy.”

Heresy is a word that gets thrown around a lot on Twitter by people who often don’t understand its meaning and historical context, but for theologians accusations of heresy can have serious implications. Theologians can be censured, banned from teaching at Catholic institutions, and silenced by the Vatican. The Twitter war during the synod reached deeply unpleasant levels for anyone who waded in, but the heresy barb was clearly the thing that prodded the signatories to speak up. And initially, there was an outpouring of support for the letter, with many PhDs adding their names.

But what many appear to have glossed over in the letter was the line stating that Douthat has “no professional qualifications” to write about Catholicism. To be sure, Douthat has no professional claims to accuse anyone of heresy; the Vatican’s Congregation for the Doctrine of the Faith remains the only Church body formally able to do that, and they rarely even use the word anymore, preferring to stick with more guarded language.

But the question remains: is Douthat qualified to write about Catholicism? He converted in his teens, and has practiced the religion for several decades. He wrote a book about Christianity and Catholicism in America. His columns may reveal, as Faggoli implies, problematic notions about church history and theology, but does that make him “unqualified”?

Speaking as a person who, like Douthat, lacks the PhD in theology and affiliation with a Catholic institution that many of the letter’s signatories possess, this gave me pause. The fact that we are both Catholic, and have both written books on American religion is about all that Douthat and I have in common. However, we have reached a moment when the Catholic Church is so divided, so entrenched in ideas of “sides” and “takes,” that finding common ground is increasingly difficult.

But as a member of what might loosely be defined as the Catholic Left, and as a writer, I have to here defend Ross Douthat, something I never thought I’d do. Is Douthat unqualified to teach theology at a Catholic school? Probably. Is he unqualified to deliver lectures on Catholic theology at the invitation of First Things? No. They invited him. Is Douthat what we want in a public theologian? Perhaps not.

If Douthat represents the Catholic right, and the theologians objecting to him swing more toward the liberal side, aside from the snipe about being unqualified, their paths depart in language and tone. Douthat frequently talks about schisms, splits, and wounds to the church. He accuses Pope Francis of starting a civil war. Language and tone are the weapons of the op-ed columnist; and this, along with the heresy barb, is actually some dangerous language—as well as a paranoid, threatened, and potentially dangerous tone.

In this propensity, Douthat echoes many church leaders. Cardinal Burke talks about “diabolical attack” while Dolan, Cordileone, Chaput and others fret about the church being under “threat.” When they retreat into the language of violence, some might wonder whether we really want to go back to religion being about a reign of terror in which people only belong to a church because they feel it’s being threatened.

But when theologians imply that those without a PhD aren’t qualified to speak or write publicly about religion, this looks like closing ranks. It looks like clericalism, which the Franciscan Dan Horan describes as “clergy who, for whatever reason, feel they are above, better or more special than others.” This kind of elitism may be more subtle than language of schisms and wounds and splits, but it has its own unpleasant implications.

Liberal Catholicism, such as it is, has enough problems already, with very few public figures willing to speak up on its behalf. Priests and bishops who express any sort of tolerance toward LGBTQ people, as the Australian Archbishop Mark Coleridge did during the synod, are greeted with “mouth-frothing wrath coming from dark places.”Father Jim Martin, who regularly writes about the need for recognition that doctrine can evolve over time, is constantly bombarded with trolling and accusations of heresy of his own. So it’s easy to see why liberal Catholics have felt abandoned by church leadership for decades.

Pope Francis represents the tiniest, most incremental steps toward shifts in doctrine that could have happened years ago, but he too is bombarded by vitriol from Catholics who see the church as a calcified, immobile monument.

Douthat is likely one of those Catholics who would prefer the altar to be turned around, the pews shoved back into rigid rows, women kicked out of the sanctuary and Latin Mass brought back to a country where Latin is rarely taught in schools. Or perhaps that’s what his supporters think he prefers. And they can defend that choice to see the church as incapable of evolution with vitriol, anger and rage. It doesn’t mean they should, and it doesn’t mean they’re right.

But the Catholic Church isn’t just the church of Douthat, Latin Mass traditionalists, or the theologians who signed the letter. It’s also the church of a billion people around the world, each experiencing it in different ways, each living out their faith individually and collectively. And each of those people is qualified to talk about how they live that faith, whether they do so in the op-ed column of the Times, at a potluck, in the middle of the desert, on CNN, or here on RD. It’s when either side tells the other to shut up that the problem starts.The Pope has asked us to try to listen to one another. Maybe we can start there.