​No, Kerala is stealing it away! Impunity, thy name is Uttar Pradesh! 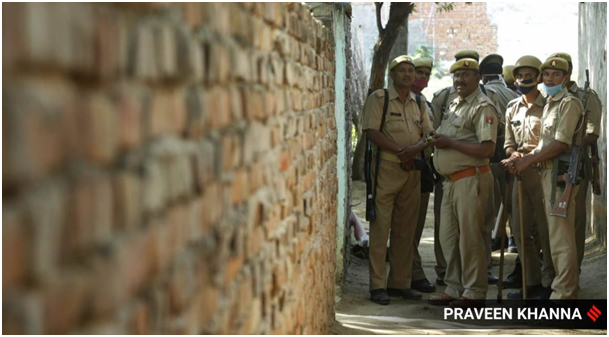 Impunity only in UP? It would be more realistic to say: “India is no place for women, especially the dalits, the so called untouchables!”The weapon used against them is RAPE! Robing their very womanhood, the most precious thing, they can be proud of.

Justice  delayed is justice denied! In that sense it is Kerala, both religiously and politically – think of Abhaya case and Nikrushta Jeevi (detestable creature) epithet for an Archbishop, by a political power weelder! Too much to write, we don’t do it here.  Think also of the long drawn gold smagling case going on in the state!

This happens wontonly even in the most literate state, Kerala. The latest that hogged the limelight was that of few women driven to despair were forced to take action against the despicable villan, and that after making so many complaints to police which proved futile! And who got punished and arrested immediately without bail?

See not, hear not, speak not!

The poor women who dared to question the prevailing IMPUNYY of the Kerala police whose eyes don’t see, ears don’t hear, mouths go dumb when womanhood is trampled under foot! And the so-called enlightened public keep their mouths shut out of fear! Shame, shame Kerala, call yourself: “Educated Illiterates!”

If legal course and civilized behavior do not prompt, crime & punishment system react in the most literate state in India, even to file a case against the culprit, what hope is there for women folk in India to get justice done?

We are not saying action taken against women was unjust! Whose complaint should have been heard first? Of the first, or last? Police failed more than once to respond to women’s complaint but acted instantly at the Male criminal’s complaint! Patriarchy rules roost. The so-called BETTER HALF is given worst treatment! Anything more uncivilized and shameful?

We hold this a clear case of miscarriage of justice and feel terribly sorry for the fair sex!   No change of attitude possible? It is YES for those who never give up fighting till one’s last breath! james kottoor, editor ccv.

Please read below report on UP!

Every injustice owes its origin to the sense of impunity that is entrenched in the system: not admit any lapse or complicity, and so on my power is my sword; my epaulette above my breast pocket (IAS, IPS, Dr) is my shield; my caste folk will fight for me; my government and the ruling party will. Governments tolerate the sense of impunity as long as officialdom does not defy the writ of the government A young girl died on September 29, 2020, at Safdarjung Hospital, New Delhi. In her statement given on September 22 to a magistrate, the girl had said she was assaulted and raped on September 14, and named four men belonging to her village in district Hathras, Uttar Pradesh. When she died, the police hurriedly took the body to the village and cremated it at about 2.30 am on September 30.

The girl belonged to a poor Dalit family. Relatives of the four men who were arrested described the family as neechi kaum (low life) “whom they won’t touch with a barge pole”. There are thousands of such Hathras villages in India. These villages have a few Dalit families; the Dalits own little or no land, usually live in a segregated habitation, do low-status and low-paid jobs, and are dependent on the other dominant caste groups. The victim’s father owns two buffaloes and two bighas of land, and works as a part-time sanitation worker in a neighbouring school.

Emboldened by great social reformers like Mahatma Phule, ‘Periyar’ E V Ramasamy, Babasaheb Ambedkar and others, Dalits have politically organised themselves in a few states; but their status is only slightly better.

Rape is a widely prevalent crime in India. According to data maintained by the NCRB, there were 32,033 incidents of rape against women (excluding POCSO cases) in 2019, of which 3,065 were in Uttar Pradesh. Many cases of rape are registered as crimes, investigated and tried. Given a conviction rate of about 28 per cent, many accused are convicted. There is a buzz for a few days after the crime, but it soon dies down. Some cases become ‘events’; the Hathras case is one for good reasons.

The Hathras case is an example where everyone from the SHO of Chandpa Police Station to the district superintendent of police (SP) to the Principal, Jawaharlal Nehru Medical College and Hospital, Aligarh to the district magistrate (DM) to the ranking police officer in charge of law and order (ADGP) to the chief minister of the state (CM) seems to have been infected by a virus called Impunity. It is as if a pandemic has swept across the officialdom in UP. Consider the words and actions of the key players:

In a state where the administration is tightly controlled by the Chief Minister, Shri Adityanath, is it possible that each of the above actions (with the exception of the SHO’s) was not within the knowledge of the CM at that time or soon thereafter?

The assault was on September 14; the first statement of the CM was on September 30 after he had constituted an SIT. Meanwhile, the key players continued to strut on the stage as though nothing untoward had occurred.

Every injustice owes its origin to the sense of impunity that is entrenched in the system: my power is my sword; my epaulette above my breast pocket (IAS, IPS, Dr) is my shield; my caste folk will fight for me; my government and the ruling party will not admit any lapse or complicity, and so on. Governments tolerate the sense of impunity as long as officialdom does not defy the writ of the government.

Now you know why injustice prevails: impunity triumphs over justice.