Youth of the world unite, you have ‘Nothing to lose except your chains’!

(In the pic: World Youth Day pilgrims cheer as Pope Francis speaks during the welcoming ceremony in 2016 at Blonia Park in Krakow, Poland. The October 2018 Synod of Bishops at the Vatican will focus on young people – CNS/Bob Roller)

Yes you, in the age groups of “16 to 29”, have to get rid of all unreasonable  restrictions and slavish submissions to what is known as parental guidance, social control of the elders at home, church or society, whose only claim for excellence is that they happen to be borne before you.

But why does the age group of youth start from ‘16’ still a minor confined to parental tutelage and not ‘18’ when one is considered an adult in society with voting rights? This remains to be answered. A hint given in the letter to Synod on Youth is that 16 to 29 is only a rough descripiction of the group which must be adapted to various circumstances and refers to that stage in life when youth of the place is considered equal to others, possibly referring to voting age in each one’s country.

Mess up comfort Zones Whenever addressing the youth Pope Francis used his famous phrase “make a mess” among people who live in ‘comfort zones’ and therefore opposed to any change in order to jolt them into troubled muddy waters to force them to do the minimum of changing at least their dirtied dress, to start with.

But the main question raised here is, how many from among the youth of the world would be allowed to take part in the next year’s  October synod. Will they be representative of the size of world youth in number from various countries: from Catholics, Christians and non-Christians since the  word ‘youth’ refers to all and sundry without their religious affiliations? We saw what happened at two family synods which were nearly without any participation of families. Those who participated were handpicked by bishops as their spokspersons and not of the laity and were denied voting rights as well.

Hour of the Laity?

That is not what we call participation on an equal footing and the pope has always been very firm in asserting, all are equal in the church, both clergy and laity. Lately he went even further saying, today is the hour of the laity when the clergy should keep quiet and look to the laity to listen and draw inspiration and guidance from.  If that does not happen in the coming synod it is going to be an eye-wash or tom-foolery. If that happens Francis alone cannot be blamed. Many of his directives for the last two synods, like conducting a survey of the laity and sending laity’s views  were not obeyed by many bishops’ conferences. India never did a national survey and the views sent to Rome, were, what the bishops decided to be sent as those of the laity. Pope John XXIII expressed his helplessness to make bishops obey saying: “I am only the Pope!” meaning, he can’t do what bishops under him have to do.

What Jeaus did in his 30ies

The future of the Church and of the world belong to the youth of this century and young world leaders like Macron 39 of France who dare to think and act boldly. Jesus was in his 30ies when he started his public life, when he had all the get-up and go to confront critics like hypocritical Pharisees and high priests on the religious front and venomous Herods and Pilots on the political horizon. The leadership in the church(es) today instead,  is in the hands of bishops in their ‘sannyasa’ years whose ‘get-up and go’ got up and went years ago making them incapable of doing anything revolutionary and transformative. Francis Pappa alone is solitary exception, even at the fag-end of his life “a miracle of humility in an era of vanity”.

The new synod promising plans and promises for a better, brighter future is due to be held in October 2018. There is enough time for the stake holders – the youth of the world — to think, plan and organize to ‘make a mess’ and give wings to their vision of a globalized humanly divine and divinely human family, “Vasudeiva Kudumbakam”(God’s family on earth).

Arise Youth of the world, like a Phoenix from the ashes, to give hope to humanity caught between divisive forces and going to pieces. You have the young and energetic carpenter of Nazareth, “sweet Jesus meek and mild” to comfort and endear and equally “bitter Jesus rough and wild”   to “make a mess” and fish from troubled waters, all in One, as your model to follow.

Synod of Bishops at the Vatican will focus on young people. 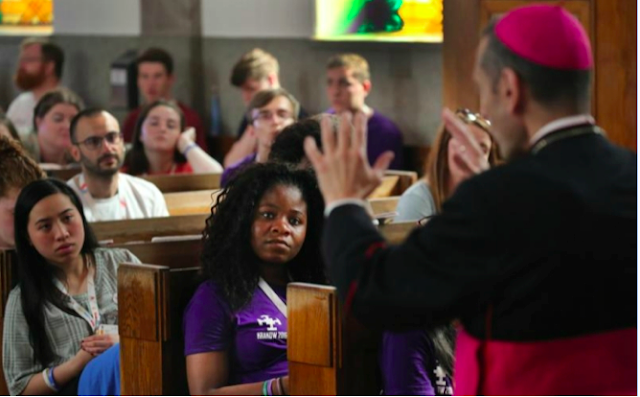 VATICAN CITY: To involve young people in preparations for the Synod of Bishops on youth in 2018, the Vatican has released an online questionnaire to better understand the lives, attitudes and concerns of 16- to 29-year-olds around the world.

The questionnaire — available in English, Spanish, French and Italian — can be found on the synod's official site: youth.synod2018.va/content/synod2018/it.html

and is open to any young person, regardless of faith or religious belief. Click here to start the survey in English.

The general secretariat of the synod launched the website June 14 to share information about the October 2018 synod on "Young people, faith and vocational discernment" and to link to an online, anonymous survey asking young people about their lives and expectations.

The answers to the questionnaire, along with contributions from bishops, bishops' conferences and other church bodies, "will provide the basis for the drafting of the 'instrumentum laboris,'" or working document for the assembly, synod officials said in January.Young people from all backgrounds are encouraged to take part in the questionnaire because every young person has "the right to be accompanied without exclusion," synod officials had said.

The list of 53 mostly multiple-choice questions is divided into seven sections: general personal information; attitudes and opinions about oneself and the world; influences and relationships; life choices; religion, faith and the church; internet use; and two final, open-ended questions. The write-in questions are an invitation to describe a positive example of how the Catholic Church can "accompany young people in their choices, which give value and fulfillment in life" and to say something about oneself that hasn't been asked in the questionnaire.

Other questions ask about living arrangements; self-image; best age to leave home and have a family; opinions about education and work; measures of success; sources of positive influence; level of confidence in public and private institutions; and political or social activism.

The section on faith looks at the importance of religion in one's life and asks, "Who Jesus is for you?" That question provides 16 choices to choose from, including "the savior," "an adversary to be fought," "an invention" and "someone who loves me." It also asks which topics — promoting peace, defending human life, evangelization, defending truth, the environment — are the most urgent for the church to address.

A synod's preparatory phase seeks to consult of "the entire people of God" to better understand young people's different situations as synod officials draft the working document. The synod on youth will be looking for ways the church can best and most effectively evangelize young people and help them make life choices corresponding to God's plan and the good of the person.