(Note: They say "Silence is Golden."  But this is not always the case.  CEOs in America speak out but not those in India.  There is a strange silence which prevails in India.  People especially those who are well-to-do and are empowered maintain an eerie silence on the unjust and unacceptable goings-on in the nation, their neighbourhood, including Church Organisations where coterie culture and corrupt practices go on unabated. Anybody who speaks out is branded as washing dirty linen in public – especially by Church authorities.  Martin Luther King, Jr. said: "History will have to record that the greatest tragedy of this period of social transition was not the strident clamor of the bad people, but the appalling silence of the good people."  Desmond Tutu said: "If you are neutral in situations of injustice, you have chosen the side of the oppressor."  "Silence in the face of injustice is complicity with the oppressor" said Ginetta Sagan,  Italian-born American human rights activist.  A very timely report by the Telegraph Kolkata. Isaac Gomes, Church Citizens' Voice). 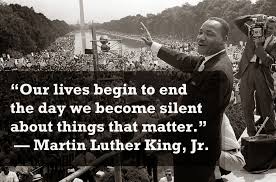 It was well past 9pm on a Saturday. But her decision awakened a flood of vitriol.

The article's title — which the entrepreneur had relayed in her post — referred to the hymn's relevance to "Modi's hate- filled India". Through the rest of that night and Sunday morning, Bangalore- based Mazumdar- Shaw responded to hate, abuse, threats against her company and suggestions that her message was motivated.

She said she was against hatepeddling vigilantes, not Prime Minister Narendra Modi.

As the backlash continued, Mazumdar- Shaw stopped after a 16- round exchange at lunchtime on Sunday, ending with a weary, almost apologetic, message.

"Yes, I too respect our PM," she wrote." I guess the caption should have focused on divisive forces within our society." In the US, the world's second-largest democracy after India, President Donald Trump's controversial response to a white supremacist rally in Charlottesville, Virginia, where a counter- protester was killed has sparked a wave of public criticism from corporate leaders and artistes.

Many industry chieftains and artistes on Presidential panels have spoken out and/ or resigned after Trump first delayed a response to the incident, then refused to explicitly name groups like neo- Nazis and the Ku Klux Klan that were involved, and finally blamed "both sides", including those protesting against the white supremacists.

Darren Walker, the president of the Ford Foundation and a board member at Pepsi- Co, told The New York Times that the forthright engagement of the executives with one of the most charged political issues in years was "a seminal moment in the history of business in America". "In this maelstrom, the most clarifying voice has been the voice of business," he said.

"These CEOs have taken the risk to speak truth to power. "On the other side of the world, Modi has chosen when to condemn hate crimes, and failed to explicitly name the outfits responsible or to distance himself from online warriors who have justified these attacks and whom the Prime Minister follows.

Almost no major industry captain or artiste has publicly pressed the Prime Minister to speak and act sooner or more forcefully. The few that have articulated worries — even without questioning the Prime Minister — have faced, at the least, online bullying.

"Corporate leaders in India don't want to be seen taking on the government," C. Panduranga Bhatta, professor and head of the business ethics and communications group at the Indian Institute of Management Calcutta, said.

"The balance of power is different from that in, say, the US. Here they fear that if they speak against the government, they may have the CBI at their door." For corporate houses keen to expand, the ability of federal and state governments in India to influence the allocation of licences or the release of loans through public sector banks is also a limiting factor, analysts and executives said.

"A lot of them just want to be in the good books of the government," Bhatta said.

These structural challenges to private companies' ability to express views contrary to the government's have preceded the Modi administration, experts said.

But the perception that criticism of the government can lead to retribution against a company and its promoters has gained strength under the current administration, several corporate leaders indicated to this newspaper — even on industry- specific issues.

This newspaper sought opinions from private- sector executives across sectors.

Some spoke on condition they would not be named. Others, including Mazumdar- Shaw, did not respond.

In 2015, nine months into Modi's tenure, the chairperson of a major private bank publicly articulated the frustration and growing impatience within industry and argued that the changes promised by the Prime Minister were yet to materialise.

At a meeting the following month, another senior official of the bank told others present that he (the senior official) had to issue a placatory statement to assuage the government, a person present in the room recalled.

Months later, in June, the chairperson moderated his earlier comments in public. The bank today declined comment on the official's private conversation or the chairperson's comments.

Modi had in April this year indicated that his government might take steps to require doctors to prescribe medicines only through their generic or pharmacological names, a proposal considered impractical by doctors, industry and medical regulators.

A spokesperson for an association of pharmaceutical manufacturers had reacted to the proposal, contending that a move to make generic names mandatory might "compromise patient safety". A day later, a representative of the association called this newspaper and said it would like to withdraw the statement.

"The statement is correct, but the association does not want to appear to be questioning the Prime Minister's views," the representative said.

Civil rights activists and observers have tracked what they argue is a growth in hate crimes — against Muslims and Dalits in particular — since the Modi government came to power in May 2014.

According to data- driven journalism portal IndiaSpend.com, 97 per cent of cow vigilantism-related attacks since 2010 have occurred after May 2014.

Modi's responses to these hate crimes have been ambiguous like Trump's.

After a mob lynched 52-year-old Mohammed Akhlaque in Dadri, Uttar Pradesh, in September 2015 on suspicion that he had stored beef in his refrigerator, Modi remained silent despite calls to condemn the act.

Ten days after the incident, Modi referred to then President Pranab Mukherjee's comments the previous day.

Mukherjee, without mentioning the Dadri incident, had advocated "tolerance". The Prime Minister said the President had shown the "path" to the nation.

After a storm of criticism built up, Modi, who had posed and smiled in public till then, broke into tears in public on January 22, speaking about the pain of Vemula's mother.

It was a month after the flogging of Dalits in Una, Gujarat, by cow vigilantes in July last year that Modi condemned violence under the garb of protecting cows.

The Prime Minister followed a similar pattern after a teenager, Junaid, was killed on a suburban Delhi train after a flurry of bigoted comments and allegations he was carrying beef in June 2017.

A week after the incident, following nationwide protests under a banner "Not in My Name," Modi again criticised violence in the name of cow protection.

On occasion, corporate leaders and film artistes have criticised hate crimes and voiced their concerns — without directly linking Modi to these incidents. But the response they've faced has bolstered perceptions that criticising the government may come with costs.

In the US, customers have pressured companies to get their CEOs to boycott Trump's panels after Charlottesville. In India, it was Modi supporters who threatened a boycott of Snapdeal unless Khan was dropped.