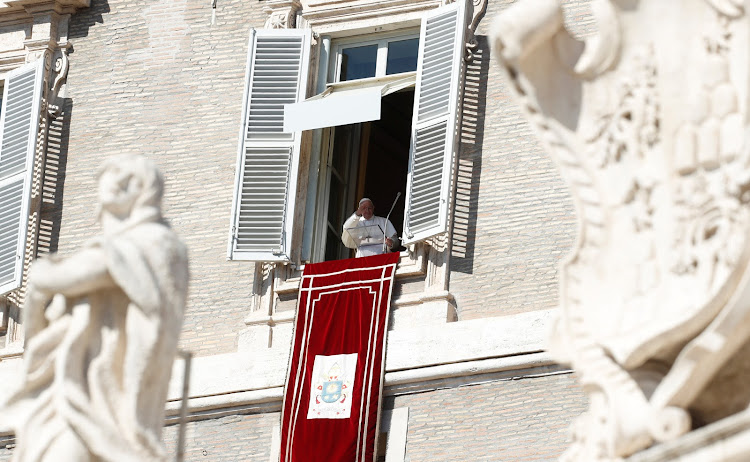 Pope Francis leads the Angelus prayer in Saint Peter's Square, after the closing of a four-day meeting on the global sexual abuse crisis, at the Vatican, February 24, 2019. Image: REUTERS/Remo Casilli

The Pope has spoken his mind at the end of the four-day consultation at the Vatican, on the global clerical sexual abuse crisis.  He has promised an "all-out battle" against abusive priests at the end of the landmark Vatican summit.  He has reportedly handed 114 senior bishops a roadmap to shape the debate on tackling paedophile priests. He also mentioned of his wish to create "task forces" to help local parishes fight clerical paedophilia. There is some assurance that the Vatican will draw up guidelines for bishops on dealing with abuse cases. But his interview clearly centres on child sex abuse by the clergy.  He is totally silent on clergy abuse of nuns and vulnerable (especially those who seek financial assistance) women.  In a way he and his advisers including India's Cardinal Oswald Gracias (he has not uttered a word on the clergy sexual abuse malaise in India), have cleverly sidetracked the burning issues of money power and sex involving Frightening Franco Mulakkals.  Well-known woman activist Virginia Saldanha the former executive secretary of the Federation of Asian Bishops' Conferences Office of Laity,  Secretary Indian Women Theologians’ Forum and an advocate for women's issues, in an interview last month to  Radio Veritas South Africa, had expressed her scepticism about the just concluded conference in Rome. She had said that the 4-day Vatican Conference would be just another Boys' Club Meeting of people with whom the Vatican powers-that-be were comfortable with; to the exclusion of voices they do not want to hear and/or be challenged with.  She said that women including nuns have been suffering clergy sexual abuse for ages.  One of the main reasons for this continued oppression was the well-controlled and very-well-muzzled Church structure. Virginia is well-aware of a priest-principal of a Catholic school  (in Kolkata) who has been harassing his female members of the staff for sexual favours. But he is being protected by his Provincial and the Archdiocese of Calcutta, all in the false belief of protecting the Church! Instead of taking action on the predator priest, the victim has been charge-sheeted and showcaused for standing her ground and having approached the polilce including the West Bengal Women's Commission (which did nothing) and on alleged reporting her matter to the press (Eastern Chronicle 28 November 2018). The Archbishop is well-aware of it as the victim met him several times seeking justice against being forced on her knees, starting with 50% subsistence pay on account of the Show Cause Notice. The predator priest principal is strutting like a peacock smug in the arrogance that he has the support of the police administration and the judiciary (whose sons study in his school).  This is the way most Catholic Missionary Institutions behave now-a-days. It's time this culture of silence was broken and leading lay associations including Indian Catholic Forum which had its maiden national consultation at Proggaloy, Kolkata from 9-11th February 2019, took up the matter with the Indian Church Hierarchy on a war footing. Isaac Gomes, Asso. Editor, Church Citizens' Voice.

Pope Francis on Sunday vowed to tackle every single case of sexual abuse by priests, comparing paedophilia to "human sacrifice", but drew an angry response from victims.

As the pope promised an "all-out battle" against abusive priests at the end of the landmark Vatican summit on the issue, his critics dismissed his speech as a "stunning letdown".

And when he blamed the Devil for abuse in the Church, one victim described his comments as "pastoral 'blah-blah'".

In his closing address to top bishops he also insisted the Church was not the only place children were assaulted.

"If in the Church there should emerge even a single case of abuse — which already in itself represents an atrocity — that case will be faced with the utmost seriousness," Francis promised.

"I am reminded of the cruel religious practice, once widespread in certain cultures, of sacrificing human beings – frequently children – in pagan rites," he said.

The sexual abuse of minors was "a widespread phenomenon in all cultures and societies", Francis said, as he denounced priests who prey on children as "tools of Satan".

"I make a heartfelt appeal for an all-out battle against the abuse of minors both sexually and in other areas… for we are dealing with abominable crimes that must be erased from the face of the earth," he said.

Children must be "protected from ravenous wolves", he said, adding: "We stand face to face with the mystery of evil".

The scandals have hit countries around the world, with lives devastated from Australia to Chile, Germany and the US.

Pope Francis had opened the four-day meeting by calling for "concrete measures" against child sex abuse and handing 114 senior bishops a roadmap to shape the debate on tackling paedophile priests.

The pope will issue "a new Motu Proprio" on the "protection of minors and vulnerable persons", summit moderator Federico Lombardi said after the pope's speech.

"Motu Proprios" are legal documents issued under the pope's personal authority, and this one will "strengthen prevention and the fight against abuse on the part of the Roman Curia and Vatican City State," he said.

Francis also wants to create "task forces" to help local parishes fight clerical paedophilia and the Vatican will draw up guidelines for bishops on dealing with abuse cases, he added.

The meeting was marked by soul-seeking and self-recrimination by the Church, and horror stories from abuse victims.

But the 82-year-old pontiff had warned victims to lower their expectations, saying much of the work would be done after the summit.

"Pope Francis's talk today was a stunning letdown, a catastrophic misreading of the grief and outrage of the faithful," said Anne Barrett Doyle, co-director of BishopAccountability.

"If the powerful testimonies of the past week moved the needle in the right direction, the pope today moved it back," she said.

Swiss victim Jean-Marie Furbringer said: "Honestly it's a pastoral 'blah-blah', saying it's the fault of the Devil".

"It talks about the Devil, it talks about evil… There is no talk about permanently excluding child rapists and abusers who are employees of the Church," said Britain's Peter Saunders, a victim who resigned from a Vatican advisory commission on combating abuse.

Vatican specialist Marco Politi told AFP it would be "crucial to see what happens in the coming months.

"If structures are not put in place to file complaints and address the needs of victims, then the next scandal to break out will not only hit the local church but also the credibility of the pontificate," he said.

In his lengthy speech, Francis said the Church would draw inspiration from the "best practices" in the Seven Strategies for Ending Violence against Children, measures developed under the guidance of the World Health Organisation (WHO).

Those gathered at the Vatican heard testimonies from victims, one of whom was forced to have three abortions after being abused for years by a priest who beat her, while another said he had been molested more than 100 times.

"The echo of the silent cry of the little ones who, instead of finding in them fathers and spiritual guides encountered tormentors, will shake hearts dulled by hypocrisy and by power," Francis said.

"It is our duty to pay close heed to this silent, choked cry," he added.

"We wanted to see measures, to see the bishops (guilty of protecting paedophile priests) named. Start by opening the Vatican archives, not by destroying documents. Start handing documents over to the civil authorities," he said.

The Vatican has in the past refused to hand over internal documents about abuse cases to police investigating paedophilia.

German Cardinal Reinhard Marx admitted Saturday that "files that could have documented the terrible deeds and named those responsible were destroyed, or not even created".