Pope and Trump meet for the better – Stephanie Kirchgaessner, in The Guardian,Thursday 25 May 2017

Encounter considered more successful than their first but was noteworthy for its sombre tone. What is the most pointed present you have given or received?

Pope Francis poses with Donald, Melania and Ivanka Trump at the end of a private audience at the Vatican. Photograph: Evan Vucci/AFP/Getty

(Note: It only means practicing what one preaches is not easy even for a saintly pope. Hopes are there to keep us, up and doing till we get disappointed and then to take disappointment as a chanllenge to try again. That is life in this world of day and night. So continue to hope till we die in despair! Keep happy and trying, that is the art of living.

Francis had questioned Trump’s Christian credentials and had asked him to build bridges instead of walls. Trump had retorted questioning the Christian credentials of a Pope who questions another’s cherished beliefs. Who is to be praised or blamed for both the comments. It was a tit-for-tat well plaid by both. Lesson: if you criticise you get criticized as well. That is part of give and take.

Old habits – both good and bad — die hard. In the case of Francis it is inseparable attachment to the poor and needy; in the case of Trump it is white supremacy and Muslim hatred. Both are trying to smile even when having those traits. In doing that it looks, it looks, Trump beat Francis in Smiling with bitter thoughts within. That is already an indication he is making progress in the art of looking good before the world.

Both exchanged gifts – books on Martin Luther and an Olive branch medallion — as  items of the protocol, but more to tell each other what the one wants to tell the other without telling: end a divided Christianity and work for peace, not to start world war. All is well that ends well. So we all have another spell of hoping for the better on  both sides. That after all is the sum and substance of the art of living. james kottoor, editor)

Pope Francis once said that Christians must have “cheerful faces and eyes full of joy”. But there was little evidence of those emotions as Donald Trump descended on the Vatican on Wednesday for his first face-to-face meeting with the Argentinian pontiff.

The encounter was ultimately considered a success following a rocky start to the pair’s relationship last year, when Francis questioned Trump’s Christian credentials. But despite a warm trading of gifts and humorous exchange between Pope Francis and the first lady, Melania Trump – in which the pope asked if she fed him a popular kind of Slovenian cake – the meeting was noteworthy for its sombre tone at the start.

Pope Francis asks Melania Trump: 'What do you feed him?' Greeting the US president in the papal library, Francis did not exude his usual warmth and cheerfulness even as Trump proclaimed that it was a “great honour” to meet him.

Photographs taken after their meeting showed a glum-looking pope, in contrast to the smiles when Francis met Trump’s predecessor, Barack Obama, who reportedly used to carry a rosary with him that was given to him by the pontiff.

The tensions were perhaps to be expected: the two disagree on the issues that lie closest to Francis’s heart, from climate change to the need to integrate and accept migrants of all faiths. As they sat down opposite one another at a large wooden desk, Francis signalled to the president that it was best to talk out of the earshot of reporters and cameras, who were quickly led out of the papal library. The two then had a 29-minute chat with only the interpreter present, not quite as long as the nearly hour-long conversation the pope had with Obama when they met in 2014.

“Obviously there was no evidence of the great chemistry he had with Obama. There was something special there with him,” said Austen Ivereigh, the pope’s biographer. “I think it was a solemn occasion that called for formality and protocol and both demonstrated that … they looked much more relaxed at the end,” he added.

The discussion was described as cordial in a statement by the Holy See, which said “satisfaction was expressed” for the good US relationship with the Vatican and their “joint commitment in favour of life, and freedom of worship and conscience”.

“It is hoped that there may be serene collaboration between the state and the Catholic church in the United States, engaged in service to the people in the fields of healthcare, education and assistance to immigrants,” the statement said.

Left unsaid was the fact that the Trump administration’s policies on migrants have been condemned by Francis’s allies in the US, including Joe Tobin, the archbishop of Newark, New Jersey. They also discussed world affairs, including interfaith dialogue and peace in the Middle East, with emphasis on the protection of Christians.

Rex Tillerson, the US secretary of state who accompanied the president, later confirmed that Trump and Francis had a “pretty extensive” conversation about terrorist threats and the radicalisation of young people.

By the end of the half-hour private meeting, once the door to the library was reopened, Francis seemed more chipper. Upon meeting the first lady, he asked her whether she fed her husband potica, the pope’s favourite Slovenian dessert. An interpreter then asked Melania: “What do you give him to eat?”. It was unclear whether the first lady understood the remark, and seemed to say, “pizza?” before smiling and answering, “yes”.

The US president was also accompanied by his daughter Ivanka, her husband, Jared Kushner, national security adviser HR McMaster, and personal assistant Keith Schiller, as well as press aides.Trump arrived at the Vatican at about 8.30am after spending the night at the residence of the US ambassador to Italy. That post has not yet been filled by Trump’s administration.

Trump was led into the frescoed halls of the Vatican with Melania – dressed in a traditional black dress and veil, as is custom but not mandatory – walking a few feet behind him.

“It’s not like Trump Tower in New York,” a German archbishop, Georg Gänswein, could be overheard joking to Trump as the president’s entourage shuffled into a Vatican elevator.As is customary, the two exchanged gifts. Trump offered the pope a large box that he said was filled with books written by Martin Luther King.

“This is a gift for you,” Trump was overheard saying. “I think you will enjoy them. I hope you do.”Francis gave Trump a large medallion that depicted an olive branch, a symbol of peace, to which the president replied: “We can use peace.” The medallion is traditionally offered to politicians, though the symbol varies. 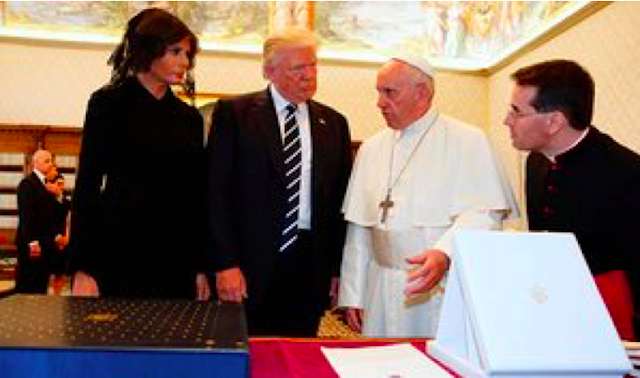 The pope also offered Trump some of his latest writings, known as encyclicals, including his work on the need to protect the environment. “Well, I will be reading them,” Trump said.

As the president left the room, he expressed gratitude to the man he once called disgraceful for questioning his faith. The dispute was related to Trump’s proposal to build a wall between Mexico and the US – a policy the pontiff had said was not Christian.  “Thank you, thank you, I won’t forget what you said,” Trump said in his parting words.

The president then spoke to Pietro Parolin, the Vatican’s secretary of state, for nearly an hour. According to Tillerson, the two had a “good exchange on climate change”. The president and first lady were given a tour of the Sistine Chapel, after which Melania visited a children’s hospital in Rome while Ivanka toured Sant’Egidio charity centre.

Trump, who will fly to Brussels on Wednesday for a Nato summit, will wrap up his tour on Friday at the G7 summit in Sicily.