(“A friend of Plato, but a friend of Truth first!” is an ancient  saying which contains the wisdom of ages. You reap what you sow, love begets love, hug begets hug, so it looks, it is hugs all the way. Has Modi set out to conquer the globe with hugs? But one little caveat: Why not start  it at home with hugs with Muslims, both wearing skull caps!

Just think of it, Israel had been waiting for an Indian PM’s visit for the last 70 years. Why only 70 years, take a run through the corridors of history, Israel and India hugged each other 2000 years ago in the person of Doubting Thomas.

In the person of Thomas, Jewish nation took the first initiative to hug India and the royalty in Kerala reciprocated warmly and hospitably in the Indian spirit of “Adhidi Devo bhava”. Visit Fort Kochi to witness the bonhomie that existed and still exists between the Abrahimic religions and the “Vasudeva Kudumbakam” spirit driven Indian universal vision towards all religions and nationalities. The present  hug is a meeting of two grown ups – Indian talent and Israeli technology, I-squared and T-squared.

The Indian Jews in Israel are excited over Modi visit. But the start of a new friendship with a country should not be at the cost of a long-standing soul-relationship with another country – Palestine people – whom Israel has made homeless in their own country and whose territory Israel has been occupying even now, besides opposing its natural claim to statehood. That is the glaring truth staring in the eyes of all especially when it comes through the mouth of UN.

It is again like the RSS and Modi’s Hindutva brigade denying Muslims, Christians etc. equal citizenship in India. This is atrocious. Trump's US practises the same when it treats African Americans  and colored people as second class citizens. One cannot have one policy to make friends and influence people abroad, and its opposite at home without being labeled as a  crook or hypocrite or at least as one not honest and straight forward. We in India want Modi to be a man of “saab ka saat and saab ka vikas” every where, with all peoples and all the time. james kottoor, editor, ccv.

Please read below the article in Hindustan Times

Prime Minister Narendra Modi and Israeli counterpart Benjamin Netanyahu hugged three times and referred to each other as “my friend” several times, with their mutual bonhomie openly evident to a large crowd that included the entire Israeli cabinet and heads of Abrahamic faiths. 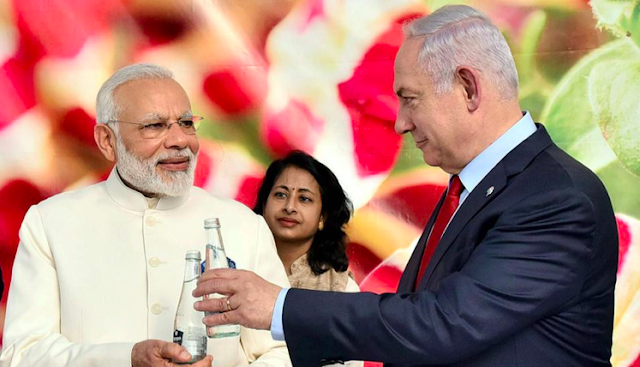 India and Israel on Tuesday took historic steps towards a new engagement, with Prime Minister Benjamin Netanyahu welcoming his visiting Indian counterpart Narendra Modi by saying the future of the bilateral relationship lay in Israeli technology being wedded with Indian talent.

Modi’s visit, the first by an Indian prime minister since the two countries established diplomatic ties in 1992, is expected to elevate the relationship built on the bedrock of defence and security cooperation to a higher level by boosting collaboration in high technology, agriculture, water management and trade.

Netanyahu personally received Modi at Tel Aviv’s Ben Gurion airport, an honour previously accorded only to the Pope and the US President. He greeted Modi in Hindi, saying: “Aapka swagat hai, mere dost (Welcome, my friend).” Modi responded in Hebrew, “Shalom, ani same’ah lihyot kan (Hello, I am happy to be here).”

The two prime ministers hugged three times and referred to each other as “my friend” several times, with their mutual bonhomie openly evident to a large crowd that included the entire Israeli cabinet and heads of Abrahamic faiths.

Describing Modi as a “great world leader”, Netanyahu said Israel had waited for the past 70 years for a visit by an Indian premier. “It is truly a historic visit,” he said, adding, “We love India and we view you as kindred spirits in our journey.”

Netanyahu referred to Indian talent and Israeli technology as “I-squared and T-squared” during the red carpet welcome and added: “I-squared plus T-squared is the future of our bilateral ties. When I and Prime Minister Modi met on the sidelines of the UN General Assembly in September 2014, we decided to break down the final walls that separate us. Prime Minister Modi said the sky was the limit but today we have reached space with the two countries joining hands.”

Modi reminded the gathering that Tuesday was the 41st anniversary of Operation Entebbe, Israel’s daring mission to rescue more than 100 passengers of an airliner that was hijacked to Entebbe airport in Uganda. Netanyahu’s elder brother, Col Yonatan “Yoni” Netanyahu, was killed during the operation.

Netanyahu also referred to the importance of IT in both countries, saying the two most spoken languages in Silicon Valley are Hindi and Hebrew. This, he said, was evidence of the skills and talents possessed by both the people.

Talking to Hindustan Times after the ceremonial welcome, Micheal Oren, deputy minister in the Israeli Prime Minister’s Office, said with India and the US as friends of Israel, a close trilateral relationship would be the future. As the US withdraws from the region, India, as a country with democratic values, should join hands with Israel, he said.

In his welcome speech, Modi said the people of Israel had built a nation on democratic principles and marched forward despite adversarial conditions.“Alongside building a partnership for shared economic prosperity, we are also cooperating to secure our society against common threats such as terrorism,” he said.

During the drive from Ben Gurion airport to Jerusalem, Netanyahu escorted Modi to the Danzinger flower farm in Mishmar Hashiva, a showcase for agro-technology and one of Israel’s leading floriculture firms, where a new fast-growing chrysanthemum flower was named after the Indian premier.

At a joint address later, Modi he called for resolutely opposing the evils of terrorism, radicalism and violence that has plagued the world. “Yad Vashem is a reminder of the unspeakable evil inflicted generations ago,” he said in a press statement along with his Israeli counterpart Netanyahu.

Modi, who laid a wreath at the Yad Vashem Memorial museum and paid tributes to over six million Jews killed by Nazi Germany, said the memorial is a tribute to “your unbreakable spirit to rise above the depths of tragedy, overcome hatred and forge ahead to build a vibrant democratic nation.”Netanyahu said the two countries must stand together to fight the menace of terrorism.