Expel poison of racism in US Equally Castism in India!

Racism in America and Casteism in India are two cancerous poisons killing the two top world democracies inch by inch. Breitbart.com is the website of Steve Bannon, the close strategist  and adviser of President Trump, just sacked from holding any office in the White House.

at its peak, was what we saw in Virginia, Charlottesville, Aug. 12  a violent, bloody encounter between white-Nazi-Ku-Klux-Klan combine and a black, coloured group clamoring for equality, both of which produced the death of 32 year old Heather Heyer (see cover photo above and report below). No, no, we are not here to point an accusing finger at the great US democracy, but only trying to highlight the worse plight of casteism and racism in the largest democracy in the world, shortly. 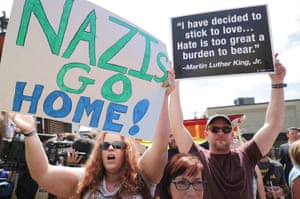 First racism in US. Charlottesville explosion was driven by the height of arrogance of a white president going to the ridiculous extent of supporting and approving violence on the part a white-Nazi Alt-right  group shouting “whites only matter” in the land of America, thereby implying and warning, not to dream any more for another black President. Most Americans and the world at large had hoped, that with the election and superb performance of a President Obama, US had finally settled or at least was beginning to merge into a multi-cultural society.

To those shouting “black people matter”, Alt-left, equally,  the message was that the cost would be brutal slaughter that  befell ‘Heather’. Butchering of blacks had stalked the length and breadth of the country in the good old ‘slavish’ days. The present racist fire was lit and fanned into flame and fury by the website Breitbart.com of Steven Bannon with whom Trump was inseparably stuck with as his chief strategist even in this crisis moment. But mass revolt even from weighty members of the republican camp itself forced Trump to drop Bannon from his embrace and the white House circle,  to save own  skin and throne.

The silver lining in this whole scenario is, that the Catholic Church in the US is waking up belatedly at least and  calling racism poison of the soul, ugly original sin of America from which it has not fully recovered  and  Charlottesville the weeping, bleeding wound of racism and taking serious steps to draft a new pastoral on Racism, since the  1979th  pastoral, though well written was never well publicized, explained and implemented.

What is of serious concern for India is that similar or worse racial practices or untouchability based on caste system sanctioned by religion are practised and enforced at all levels of political and Church life, shamefully, by priests and bishops.

Recall the many articles we wrote about the silence of bishops, even CBCI head when Kadappa bishop was kidnapped and tortured by his own upper caste Reddy priests. Even the CBCI Chairman kept his mouth shut in spite of letters from us, Fr.Bosco, Dalit leader in Kadappa and other laity groups there.  Only cardinal  Oswald of Bombay was prompt to speak out and condemn it instantly. Many dioceses in India stay vacant long because fight between candidates of different castes can’t be settled. When African students were attacked or killed in India, reaction from churchmen was nil or lukewarm.

A whole lot of issues are there to be discussed and corrected, perhaps later. At least the Indian Bishops can imitate the US bishops to bring out  an eye-opening, soul-searching, chest-thumping pastoral letter for wiping the dirty practice of Caste system, abominable and shameful but systematically and boldly practiced as something honorable, among Christians, starting from Bishops, priests and laity.

If the top brass in the Indian hierarchy set an example, the rest will fall in line. Talis Pastor, quails grex. Like the pastor, so the flock. james kottoor, editor-in-chief, CCV.

"Unite the Right," a rally called by white nationalist, white supremacist and alt-right groups in Emancipation Park, Charlottesville, Virginia, Aug. 12 to protest the city's decision to remove a statue of Gen. Robert E. Lee, turned bloody and violent. Heather Heyer, 32, a paralegal from Charlottesville died, and at least 19 people were injured after a driver with ties to white supremacists rammed his car into counter protesters.

An article on Breitbart.com, the website of far-right American news, opinion and commentary, quotes conservative talk show host Laura Ingraham denouncing the removal of Confederate Civil War memorials as "the eradication of history" and disrespect for "all of our war dead."

We refreshed our website! Drop us a line at redesign@ncronline.org to tell us what you think. We value your feedback."What else will be subjected to their eradication and denunciation?" she said. "This is not about racial healing. This is about the control of the narrative and a destruction of historical recognition. That is terrifying. And what about books?

Are they going to start burning books, too? I mean why not?"

This short article was followed by more than 6,500 comments left by readers of Breitbart, which White House Chief Strategist Steven Bannon helped start in 2007 and ran from 2012 to 2016. Here is a small sampling:

This same line of thinking was expressed by President Donald Trump on the afternoon of Aug. 15 when he seemingly repudiated an earlier statement condemning white nationalists and white supremacists. He criticized "alt-left" groups that he claimed were "very, very violent" when they sought to confront the nationalist and Nazi groups, again saying there is "blame on both sides."

"They were there to protest the taking down of the statue of Robert E. Lee," the president said. "This week it's Robert E. Lee. I noticed that Stonewall Jackson is coming down. I wonder, is it George Washington next week and is it Thomas Jefferson the week after? You know, you really do have to ask yourself, where does it stop?"

It is unsettling to see this twisted joining of revisionist history and misguided Scripture quotes. Yet this is what we are up against.

"Racism is a poison of the soul. It's the ugly, original sin of our country, an illness that has never fully healed," Philadelphia Archbishop Charles Chaput wrote in one of the most powerful statements from a Catholic leader. "Blending it with the Nazi salute, the relic of a regime that murdered millions, compounds the obscenity."

Trump's response was worse than inadequate. He demonstrated a lack of moral leadership and — again — his lack of qualifications to hold this office. But that is not the subject of this editorial. The question we have before us is: What do we, the American Catholic faith community, do next? Charlottesville is a visceral reminder that we can't turn away from this.

As Americans, we must be honest about U.S. history. "The Confederacy was on the wrong side of history and humanity," said New Orleans Mayor Mitch Landrieu, explaining why he began removing Confederate statues from his city this spring. The Confederacy betrayed our union and fought for a system that enslaved people. Lee and Jackson cannot be equated with Washington and Jefferson. That honesty does not exculpate our Founding Fathers from their sins of racism and sexism, but it allows us to talk about our historical failings and move forward.

As people of faith, it would be good to talk here about bringing healing to this wound, but the sad fact is that we, as a community, are not yet ready to become an instrument of healing because we have not yet expelled the poison of racism from our own body.

Leaders in the National Black Catholic Congress, which met this summer, informed members that the U.S. bishops are working on a pastoral letter to follow up on their 1979 pastoral letter on racism, "Brothers and Sisters to Us," which condemned racial prejudice as a heresy. At the congress, Bishop Edward Braxton of Belleville, Illinois, explained that the bishops had hoped that their letter would contribute to a process of healing and reconciliation.

However, the bishops, Braxton said, were "somewhat chastened" by the awareness that many Catholics haven't heard of the 1979 letter or of a pastoral letter issued by African-American bishops in 1984. "Sadly, they were never read, never discussed, never prayed upon, never acted on … why not?"

In November, the U.S. Conference of Catholic Bishops' Task Force to Promote Peace in Our Communities, led by Atlanta Archbishop Wilton Gregory, urged the conference to complete the new letter. "A statement from the full body of Bishops on racism is more important than ever," the task force said in its list of recommendations.

That list also included some basic and yet vital first steps toward addressing racism in the U.S., such as bishop-led conversations with local communities, parish and diocesan training, and seeking out opportunities for encounter "to see firsthand the challenges within their own and others' communities."

Has the bishops' conference or have local bishops acted on any of these recommendations? Charlottesville shows that the time for excuses, delays and inaction are past. At the very least, the bishops should write and distribute widely — and loudly — a pastoral letter that repudiates racism and supremacism and reminds Catholics of their own social teaching that "human life is sacred and that the dignity of the human person is the foundation of a moral vision for society."

(This story appeared in the Aug.25 – Sept. 07, 2017 print issue under the headline: "Steps toward expelling poison of racism".)