Cover image: Yogi Adityanath has created in his state an atmosphere in which Muslim businesses, beliefs and ordinary Muslims are permanently in his crosshairs. (Photo by Vishal Srivastav/ File )

Chief Minister of Uttar Pradesh has made it clear that cows are more important so their possible slaughter took priority. Does this make him a nationalist or  anti-national?

Note: “Nationalism, antinationalism and Patriotism” are discussed hotly in visual and print media. Are they identical or opposed to each other? This is precisely what Tavleen Singh discusses in an article  in Indian Express, given below.

Nationalism and patriotism may be considered two sides of the same coin called ‘love for one’s own country’. An overdose of them is what makes one anti one’s own or another country. The via media consists in learning to “disagree in an agreeable way” since none of us can agree on all things with another.

We all have to learn to live and let live without resorting to physical violence. Otherwise how are we going to be different from animals in the jungles? Besides what an affront it would be to  Gandhiji, father of our nation, whom the world adores for his  philosophy of ‘Non-violence’?

In a globalized world what is ideal is “World Citizenship” which CCV has been promoting. Literally it means human brotherhood. It is self-evident that a brother should not act irrationally, too selfishly, rudely or wildly like an animal preying upon another (homo homini lupus) by exterminating him; An eye for an eye, will only make the whole world  blind.

That said,  in our globalized world, ‘World citizenship’ alone can define the right limits to all brutal, animal like cravings for “localism, regionalism, nationalism and patriotism,” all summed up in the acronym “GLOCALISM = Global and Local = Universal = Common good of the whole human family.

This can never be achieved in a country like India, if it is led by leaders for whom “Might is right”, law of the jungle, and not of civilized men  with high ideals, vision and courage of their convictions.  “Like the King so the subjects; Like the pastor, so the flock.”

That drives us to perform our  awesome duty of voting in only upright men/women, irrespective of the parties you belong, to parliament in the general elections 2019. Government is your business; you get the government you deserve; GOOD, if you vote in good leaders.

In a democracy “we the people,” the voting public, are to be rulers. How can you blame MLAs, MPs and ministers you voted in? Blame yourselves, no one else, if you vote in bad leaders.  james kottoor, editor ccv. 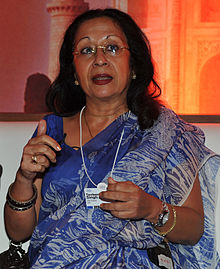 In Mumbai last week, I attended Republic TV’s summit that glittered with BJP stars. The Prime Minister gave the keynote address on the first day. The BJP president was the first speaker the next day.

I did not personally attend every session but watched those I missed on television and so happened upon a discussion on nationalism between Smriti Irani and Kamal Haasan moderated by Arnab Goswami.

Ms Irani was at her feisty best indicating clearly that she thought, because of the political party she represents, she had no need to prove that she was a nationalist and that poor old Mr Haasan did because he talked of the importance of India’s diversity. When she wore her robes of nationalism a little too smugly, Arnab asked what she had to say about the killing of cows being given more importance than the murder of a police officer in Bulandshahr recently. She evaded answering the question.

Everyone in the BJP has. Except the Chief Minister of Uttar Pradesh, who has made it clear that cows are more important so their possible slaughter took priority. Does this make him a nationalist or anti-national? It is the question that we need to start asking because there is definitely more than one group that seems bent on breaking India up once more, and right now Hindutva nationalists are ahead in the race. Yogi Adityanath is the leader of this gang of ‘nationalist’ anti-nationals. He has created in his state an atmosphere in which Muslim businesses, beliefs and ordinary Muslims are permanently in his crosshairs. Cows have become the weapon that he uses most effectively to make Muslims live in a constant state of terror.

This column has pointed out often before that India’s Muslim population is too large to ‘go to Pakistan’ or anywhere else without breaking India yet again. Does this not make Yogi Adityanath anti-national? When Muslims are arrested for allegedly killing cows, instead of the leaders of the violent mob that killed a police officer, does it not make him anti-national?

There is more than one ‘tukde, tukde gang’ around. When JNU students were arrested three years ago after videos of their slogans went viral, Smriti Irani made a speech in the Lok Sabha justifying the arrests. Their slogans, she said, were anti-national. The worst of these slogans was, ‘Bharat tere tukde honge, inshallah, inshallah (India you will be broken into pieces, God willing)’. The event was itself offensive. I am no hysterical nationalist but believe it is shameful that a commemoration should be held to remember a man hanged for his role in a conspiracy to blow up India’s Parliament. My problem is that I do not believe slogans, no matter how ugly, can break up India. And, do believe that the actions of our political leaders can. India broke in 1947 because of our political leaders. Not because students in a British university invented the idea of Pakistan.

So arresting students for being ‘anti-national’ is meaningless. What we should be doing instead is listing ‘nationalist’ political leaders who by their acts of ommission and commission are working aggressively to create an atmosphere in India in which every Muslim I know (not just Naseeruddin Shah) privately admits that he believes his community is a target. Having lived through a time when to be a Sikh was to be labelled ‘anti-national’, I find it easy to empathise.

The Home Minister said proudly last week that there had been a huge decrease in incidents of communal violence in the past year. Perhaps. But, what has grown during this same period is a menace that you feel personally if you happen to be an Indian Muslim. This too has happened before. After the Babri Masjid was demolished, a viciousness spread across India that manifested itself in hundreds of acts of terrible violence.

Is the atmosphere today as ugly as it was then under a Congress prime minister? Not yet. But, if Yogi Adityanath and the other Hindutva fanatics in high positions in the BJP are allowed to continue with their hate speeches and their weaponisation of cows to target Muslims, it will not be long before we get there.

So it really is time to list political leaders who make up the other ‘tukde, tukde gang’. It is time to remind these ‘nationalists’ that what they think is nationalism is in reality a dangerous anti-nationalism that is causing grievous harm to the country they claim to love.

Meanwhile, since they have all found their voices only since Narendra Modi became Prime Minister, he would do well to examine why this has happened and if he has in some way played a role. He needs to ask himself if he was ever sincere when he told us in 2014 that his fundamental principle for governance would be ‘sabka saath, sabka vikas’.